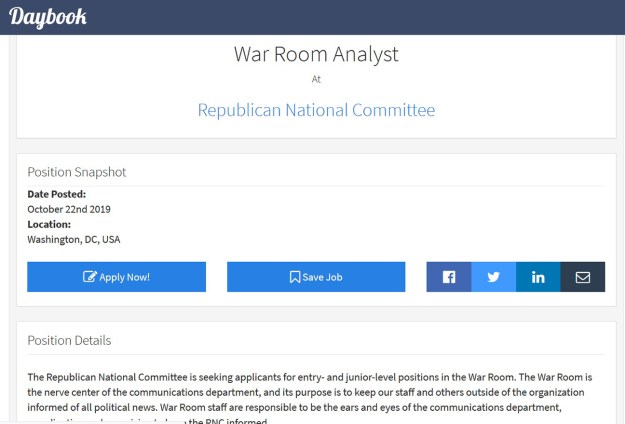 I’ve seen and heard it mentioned frequently that the White House has no impeachment “war room,” just Trump himself careening wildly from tweet to outburst, without any rhyme, reason or strategy.

That may be, but the Republican Party itself is apparently creating one. Note the job posting I found on Daybook, above. Here’s the description:

The Republican National Committee is seeking applicants for entry- and junior-level positions in the War Room. The War Room is the nerve center of the communications department, and its purpose is to keep our staff and others outside of the organization informed of all political news. War Room staff are responsible to be the ears and eyes of the communications department, coordinating and organizing to keep the RNC informed.

• Creating and distributing multiple daily products that are disseminated outside of the building, including media matrices, television & network reporter roundups, and travel coverage of notable political figures and governmental officials

• Undergraduate degree required, with a major in communications, political science, journalism or a related field a plus

• Strong research and analytical skills, including the ability to quickly and accurately identify politically relevant content and news

• A strong interest and familiarity with the current media and political environment, including political and policy issues

• Experience working on a campaign’s or party’s research team.

• Work experience in political communications or research, including on Capitol Hill, in journalism, the law, public relations, marketing, or at a trade association.

Personally, I wish no one had political “war rooms” — or at least, if they’re going to have them, that they would call them something else. Back when Bill Clinton had one (during the 1992 campaign), I found it quite offensive — only people who had never been to actual war, and had no respect for it, could call it that. And I think the mentality that made them call it that went a long way toward pushing us down the slope to today’s poisonous partisanship.

Of course, if the “war room” comes up with strategies better than the idiotic, desperate invasion and occupation of the SCIF yesterday, I suppose it would be worth it to the Republicans. One has to wonder how long trying to distract everyone from the substance of the charges against the president is going to work for them, even among the base…

21 thoughts on “Apparently, the GOP will have a ‘war room’ after all”