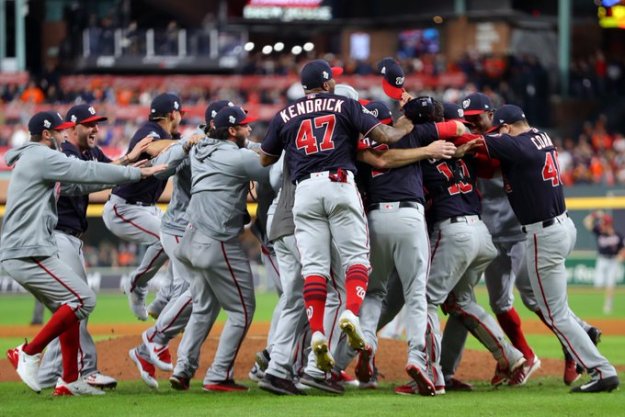 I had a little “Field of Dreams” moment during the wonderful conclusion to the World Series last night. In the sentimental “Dad, you wanna have a catch?” sense.

While Joe Buck or someone was talking about how it had been 95 years since a team from Washington had won, a picture of Senators legend Walter Johnson came on the screen. The BIg Train.

And I was reminded of a story my Dad likes to tell of when he was just a little guy. He grew up in Kensington, Md., in a house his grandfather had built for his Dad. My great-grandfather had a construction business, and he did that for each of his kids when they got married. Consequently, several of them lived quite close together. My Dad’s Aunt Ethel lived behind my Dad, on the next street over. 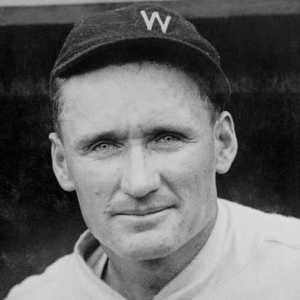 Aunt Ethel’s daughter Jean married a guy named Walter Perry Johnson Jr. — the son of the Big Train. Occasionally, the great man was a guest in their home. When that happened, Aunt Ethel’s husband Carroll would call over and tell my Dad to come over, and bring his glove. Dad would go running, and then he would play catch with the great Walter Johnson.

Speaking of the Senators, there’s a story that my grandfather was invited to play for the Senators’ organization, but decided to go into the construction business with his father instead. It seems to me a surprising decision, since his life had revolved around baseball up to that point. Ancestry offers me scores of “hints” about his life, and most of them are clippings from The Washington Post telling about some ball club or other that he was forming, or pitching for, or the captain of.

He worked for the Post Office for awhile, for just one reason: So he could play on its baseball team.

Here’s how he and my grandmother met (which I think I’ve told before): She would see him walking past her house, in his suit and wearing a straw boater, with a satchel dangling from one hand, on his way to the Kensington train station. She decided he must be a traveling salesman, and the bag contained his wares. But when she finally spoke to him, she learned that the bag was filled with his uniform, glove and cleats. He wouldn’t have thought of going to work without them. 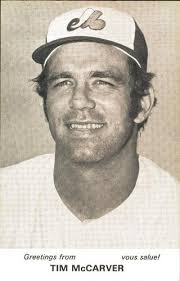 What’s he doing in an Expos uniform?

I could go in all sorts of directions about baseball and how its threads run in and out of American life. I could reminisce about when we lived in Tampa, and in the spring we’d go over to St. Pete to watch the Cardinals play. I was an autograph fiend at the time, and in those days the players were easily accessible. (Once in Tampa, I went into the Reds’ locker room to get Pete Rose to sign my glove as he sat shirtless on a table during an interview with a sportswriter. Things were that informal then.) So I would chase Joe Torre, Bob Gibson, Lou Brock, Curt Flood. But I failed to get Tim McCarver’s. He was on the other side of a chain-link fence signing for some other kids, but I couldn’t get him to turn around, despite repeatedly calling, “Mr. McCarver! Mr. McCarver!”

Years later, when I was first dating my wife, I was over at her house and she was working on organizing her family’s photos. I asked why there was a publicity photo of McCarver in the box (in an Expos uniform, which is not the way I think of him). “He’s my first cousin,” she said. So, several years after that, we happened to be at the Red Sox training camp in Florida the one year Tim played for them. Carlton Fisk injured his wrist in the first inning and Tim went in for him. After the game, we went over to the house Tim was renting during spring training. As he drank a beer, guess what I chose to talk him about? That’s right: I complained that he wouldn’t turn around and give me an autograph when I was 14.

Not long after that, his playing days ended. After that, he started his broadcast career. He would eventually be teamed up with Joe Buck, who I think was the one talking about the Senators in 1924 last night.

Which is where we came in.

(Oh, wait, something I forgot to mention: There’s meaning in the fact that Tim was, against all expectations, in an Expos uniform in that photo. The Expos are now the Nationals.)

It runs through the years and the lives, tying everything together…

I’m very pleased for the Nationals today. And for Washington… 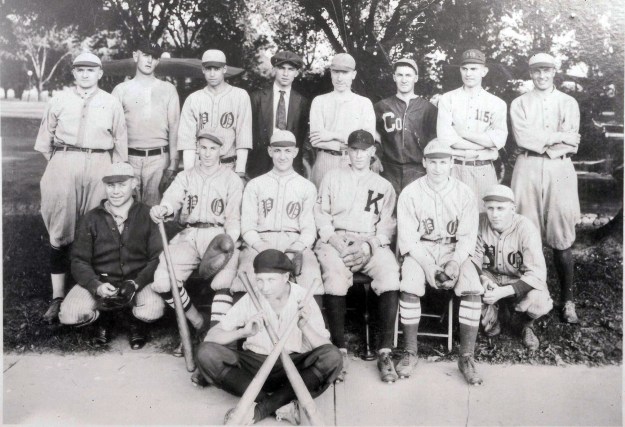 One of my grandfather’s baseball teams. That’s him squatting on the right.

16 thoughts on “Baseball, the thread that runs through our lives and ties them together”