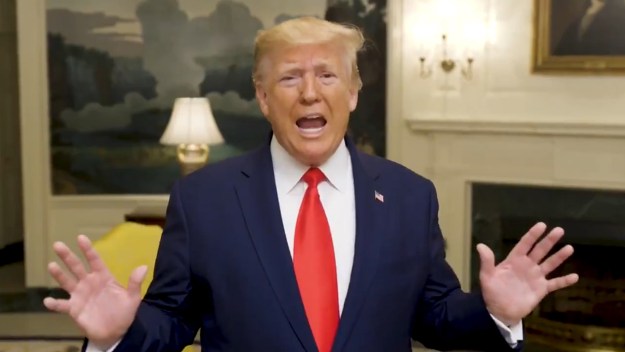 Frank Bruni reminds me of this point I’ve been thinking about making for two or three years now, but I’ve just never gotten around to it.

We know that no one who has ever held the office of president — in our lifetimes, at the least — utters more falsehoods that this guy. Certainly, no one can boast more “Four Pinocchio” scores (OK, I tried to back that up with a link, and Google failed me. Oh, I saw that the Post had to come up with a new “Bottomless Pinocchio” just for him, and that in 2018 they broke his falsehoods into two categories to keep him from dominating the standings, but I didn’t find exactly what I was looking for. I think what I’m running into is the ancient horror journalists have of saying someone or something is the most anything ever — because someone might always come up with a worse example.).

He seems the personification of the old gag, “How can I tell when he’s lying? His mouth’s moving.”

The thing is, though, what if he’s not lying, technically? What if he actually believes all of these laughably false things that he asserts with such vehemence? The guy’s not terribly bright, and he’s such a narcissist that it’s possible that he convinces himself that any assertion that is helpful, or that he perceives as helpful, to Donald Trump is automatically true.

There’s plenty we can point to that supports this position on the matter. How else do you explain, just to grab a recent example, his repeated assertion that his July 25 phone call with the Ukrainian president was “perfect?” Or that the whistleblower (remember the whisteblower, that guy whose role in all this long ago became redundant in light of subsequent revelations, a fact that has not yet penetrated the Donald’s skull?) is peddling untruths. He continues to assert both of these things even though the rough transcript the White House itself released shows him to be obviously wrong on both counts. Not to mention all of the subsequent revelations that show that phone call to be just one piece of a large, consistent pattern.

Maybe you want to say he’s crazy rather than dumb. Either way, you can say his ability to discern the truth is severely limited.

So in that case, is he a liar? Don’t you have to mean to lie for it to count?

Anyway, I’m thinking about this again after reading the recent Frank Bruni column headlined “‘Human Scum,’ ‘Lynching’ and Trump’s Tortured English.” (Subhed: “The president needs a thesaurus and a therapist, though not necessarily in that order.”)

It’s another piece addressing a thing that probably explains as well as anything why people who work with words tend to see Trump as dumb, while it is less obvious to certain other people:

The other day he turned to the bounteous trove of the English language for a pejorative worthy of his critics’ awfulness, at least as he sees it. He decided on “human scum.”

He sought to capture the horror and injustice befalling him. What he came up with was “lynching.”

There’s being crude with language, there’s being loose with it, and then there’s being Trump, who uses words the way a toddler does marbles, grabbing the ones that are most bluntly colorful and tossing them into the air just because he can.

Trump is as inept at English as he is at governing. He’s oxymoronic: a nativist who can’t really speak his native tongue….

And so on. But the passage that prompts this post is this:

I’ve written before that Trump, “in terms of the transparency with which he shows us the most eccentric and ugliest parts of himself,” may inadvertently be “the most honest president in my lifetime.” His language is obviously central to that. It’s a glimpse into his fury and fears…

Which is slightly different from what I said above. Basically, Bruni is saying that no matter how untrue and badly chosen his words are, the emotion behind them reveals the true Trump.

My point is that maybe we can’t label Trump’s perpetual flow of falsehoods as lies, because he really doesn’t know any better.

Either way, Trump comes across as less dishonest than a mere examination of facts would suggest.

What do y’all think?

185 thoughts on “Is Donald Trump our ‘most honest president?’”