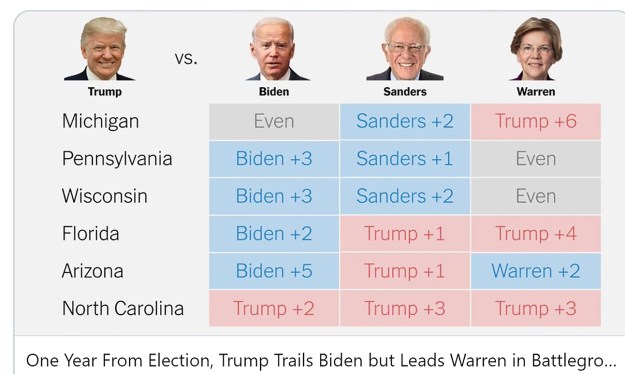 Tonight I got a fund-raising text from Joe Biden that reminded me that I meant to share with y’all something I saw in The New York Times this morning. The text said:

BREAKING: A New York Times poll says that Joe Biden is the ONLY candidate who can beat Trump in some critical swing states that Trump won in 2016.

So if Joe Biden isn’t our nominee, Trump will be reelected again.

But Elizabeth Warren and Bernie Sanders have more money than us — even though they can’t defeat Trump. And if we can’t catch up, they might be the ones facing off against him….

Here’s what the Biden campaign is talking about. See the graphic above, which I hope the NYT doesn’t mind my showing you (I urge you to go read it on their site, and even subscribe, as I do). There are other informative graphics with the piece.

Despite low national approval ratings and the specter of impeachment, President Trump remains highly competitive in the battleground states likeliest to decide his re-election, according to a set of new surveys from The New York Times Upshot and Siena College…

But the graphic (which I had to go grab from an old Tweet, because it no longer appears with the story), shouted something else: Democrats are nuts if they go with Elizabeth Warren.

Of course, I knew that already. Did you?

The story has an important caveat:

There is a full year before Election Day, and a lot can change.

But then, a caveat to the caveat:

But on average over the last three cycles, head-to-head polls a year ahead of the election have been as close to the final result as those taken the day before.

So I suppose we should take heed….

72 thoughts on “Polls indicate Trump remains competitive in key states. Oh, yeah: And if Warren is the Democratic nominee, he wins”