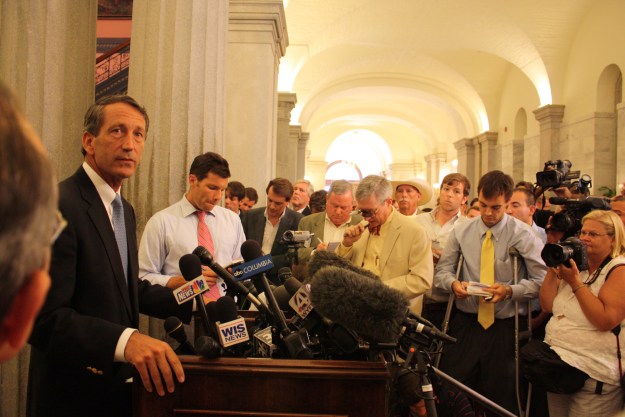 Hey, y’all will tell me when I’ve overused this particular file photo, won’t you?

Had y’all forgotten Mark Sanford was running for president? Yeah, I kinda had, too.

CONCORD, N.H. — Former South Carolina governor Mark Sanford dropped out of the race for president just moments ago, ending his protest bid 60 days after it began.

In a noon press conference at the New Hampshire Statehouse, Sanford announced his long-shot run is ending after previously declaring he would spend most of November campaigning in the Granite State, site of the nation’s first primary.

The move came after Sanford failed to collect much of a following, especially as President Donald Trump remains the favorite of most Republican voters nationally and while Washington is gearing up for impeachment hearings….

So now you know what that unsettling sound was you heard a few moments ago: It was the entire voting population of New Hampshire, crying out in dismay…

Hey, look: I kid, but at least the guy was willing to try to oppose Trump in a GOP primary. Sure, I assume he was doing it for his own reasons — payback, and an excuse to talk about federal spending — but at least he tried. Briefly….