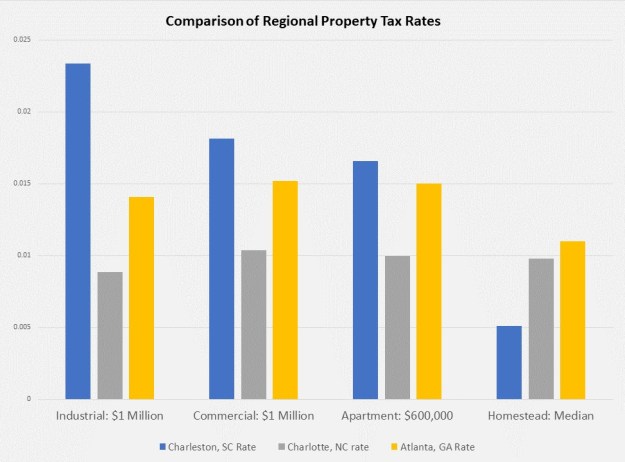 A chart the Chamber shared in context of the issue. Source: Lincoln Institute of Land Policy and Minnesota Center for Fiscal Excellence 2019

I’m kind of busy at the moment, so I’m not going to rehash all the reasons why Act 388 was an execrable piece of legislation that distorted our state’s system of taxation and made it both unfair and ineffective.

You can go back and read where I’ve done it before.

But while I’m thinking about it, I wanted to make sure you read Ted Pitts’ op-ed on the subject in The Post and Courier. Ted — my former House member — is the head of the state Chamber, so naturally he’s against something that shifted so much of our tax burden from owner-occupied homes to businesses.

I particularly appreciate that in this piece, he emphasizes the extreme regressivity of the Act, causing renters to pay as much as three times as much in property taxes as homeowners do.

Anyway, just go read the whole piece. His column refers in the lede to a recent column on the subject by Cindi. Read that, too.

Both of them, being astute and fair-minded observers, see Act 388 as one of the worst things our Legislature has done so far this century.

They’re right. That doesn’t mean anything’s going to happen. It should, and Ted is right to point to the current discussions about how we fund schools as a great opportunity. But it’s a tall order. Act 388 is the kind of dumb, irresponsible legislation that makes lawmakers popular with some of their loudest constituents. The voice of reason seldom shouts that loud.

60 thoughts on “State Chamber takes on Act 388. I wish it luck and success”