This is something new to me: a satirical video op-ed — in the Gray Lady, no less! 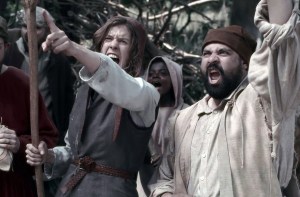 I loved it. It was accompanied by some text. Having read it, and followed the links, I’ve concluded that as just as these mobs have always been with us, they’re probably not going away any time soon — mainly because the current culprits are immune to irony.

Even President Obama’s gentle attempt to speak to them as a grownup should got the mob howling at him. As the subhed of one piece taking exception to his plea says, “Old, powerful people often seem to be more upset by online criticism than they are by injustice.”

I’m guessing that if cancel culturists see this video, when a character says, “Our anger makes us qualified,” or “I‘m a peasant, and I’m offended,” they don’t get the joke. In fact, they may even get… offended.

Anyway, to add to the fun, here’s the original: