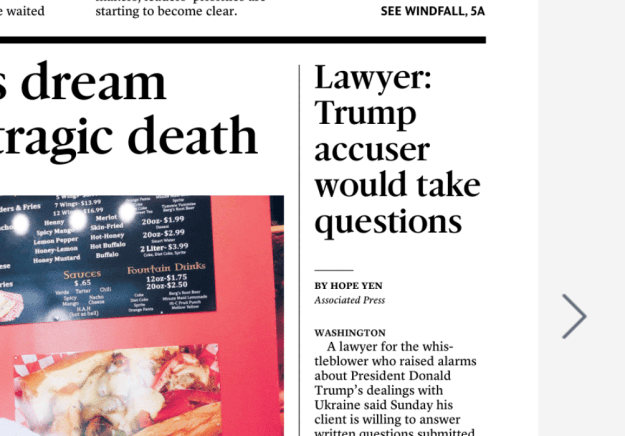 A portion of the front page of The State today…

… or her, but the hints I’ve seen have pointed strongly toward a “him.”

The front page of The State today (above) had a headline, above the fold, dealing with The Whistleblower. And I thought, “Who still cares about him?” Hence the headline.

One does hear Republicans, and their master Trump, speak of him as though he and his identity were crucial, the main point, even. And we know why. They want to have a face, a person, they can thoroughly trash, to distract everyone from the truth he told about what Trump has done.

That’s why the arguments they present make so little sense. A reasonable, impartial person might wonder why, after demanding over and over that a formal vote be taken on initiating the impeachment process, they complained so mightily when such a vote was taken last week. Because, boys and girls, that’s the point: not the facts of the matter, but whether they are recorded on sound and video loudly decrying the process and competing to see how many times they can say “sham” in one sentence. It’s about the emotion, about the indignation.

Anyway, seeing and hearing (on radio) The Whistleblower back in the news reminds me that last week I meant to share this editorial that was in The New York Times.

The headline was “Thanks, Whistle-Blower, Your Work Is Done.” And it was accompanied with a copy of the official whistleblower complaint, with portions highlighted to show things that have been corroborated by other, usually named, witnesses.

That document, of course, was pretty much redundant the day it was released — because the day before, Trump’s own White House had released the memo that confirmed The Whistleblower’s account of the July 25 phone call.

It’s only become more obsolete since then.

In fact, that editorial with the highlighted complaint has been made pretty dated with the release today of a first batch of transcripts from the closed-door depositions taken thus far.

But anyway, I pass on the editorial and the annotated complaint, as they are still interesting — although the whistleblower himself and what he had to say become less central each day. 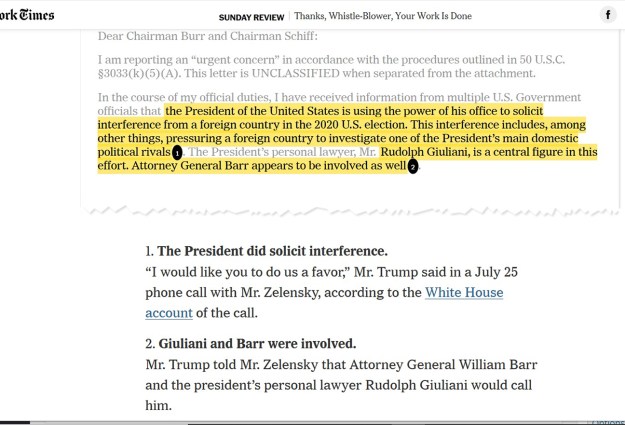 A portion of the complaint, annotated by the NYT.

5 thoughts on “The Whistleblower? Who still cares about him?”