This is really irritating.

It’s especially irritating because I can’t get back to the original ethnicity estimate that Ancestry gave me after I sent them a vial full of spit.

That one made sense, and I thought I understood it. It went something like:

I thought that gave me a pretty good sense of how my ancestors were distributed on my tree, which now has more than 7,000 people on it.

As for that big number from Western Europe — it wasn’t that I had a lot of people come to this country from France, Belgium, Germany and the like. No, the vast majority of people I’d been able to trace came here from England, and the rest from Scotland and Ireland. But a lot of those from England had ancestors from Western Europe, if I was lucky enough to trace them back a few more centuries.

And yes, as crfazy as it may sound, I was able to follow quite a few lines well back into Medieval times, and some (only two or three) to before the Norman Conquest. And it turns out a lot were Normans, and some were Welsh, but I’ve yet to find anyone I can point to and say yes, that’s a Saxon. And that means a lot of my English ancestors had nonEnglish ancestors.

And I was able to get a few of those Normans back to Scandinavia, which is where Normans came from. Of course, those were so far back they were highly dubious but it seemed consistent with what the DNA said.

So that first “ethnicity estimate” made some sense.

But since then, Ancestry has redefined its ethnic groupings, and scrambled everything up. Two or three times. Above you see the latest version.

Since when is “England, Wales and Northwestern Europe” a single ethnicity? That’s so broad and general that yeah, I’m unsurprised that I’m 65 percent that. But what does it tell me, really? pretty much nothing.

And look, below, at a closeup of that distribution: 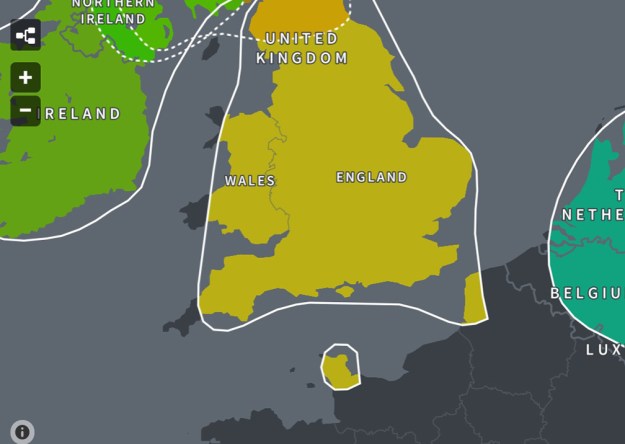 OK, that’s England, sure enough — all but a bit of Cornwall. And that’s most of Wales, all right. But as for the “Northwestern Europe” part — say what? The Cotentin peninsula, plus another little bitty slice of Northwestern France that runs a bit south of Calais? That’s IT? How is THAT “Northwestern Europe?” You should call it “England and Wales (and a few people who lived close enough across the Channel that they probably crossed back and forth a lot).”

And why did Scandinavia go in the other direction, getting more specific, narrowing down to Sweden?

And what on Earth is “Germanic Europe,” If it leaves out most of Austria?

I suspect Ancestry just has too many employees, and they need something to do, so they are assigned to frequently scramble and rescramble the “ethnicities.”

But each time they do it, they get drunk first.

34 thoughts on “Ancestry DNA told me my ethnicity. Then it kept changing its mind.”