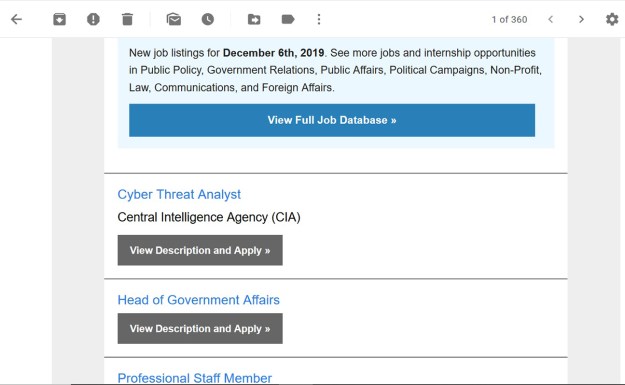 I know I’m boring y’all with these, but I continue to enjoy the daily job listings I get from Daybook.

That’s because almost all the jobs they show me are ones I would actually be interested in. And you just have no idea what a novelty that is to me, after the thousands of emails I’ve gotten in the years since getting laid off, almost none of which have any basis in who I am or what my skills are or what I might actually like to do.

But the folks at Daybook get me. I think what did the trick was my stint as communications director for James last year. That seems to have been the missing ingredient. Combined with other things in my background, it suddenly caused the algorithms to start churning out some cool jobs, things I might actually like to do in my post-newspaper career.

Today’s coolest job is “Cyber Threat Analyst.” It might not be as cool as being one of the Navy codebreakers who enabled us to win the battle of Midway, but I guess being the guy who, say, warns the country that the Russians are trying to make Donald Trump president of the United States is as close as it gets these days. (Although it seems maybe that may have been more humint than sigint.)

Never mind that I’m totally unqualified for the position. I’m not planning on applying for it. I just like the sound of it.

That’s not much, but it’s something. And I enjoy the momentary distraction…

One thought on “Uncle Jed, I wanna be one a them double-naught analysts!”