This takes me back to my own campaign experience last year:

Presidential contender Pete Buttigieg announced Monday that he would open his fundraisers to journalists and disclose the names of people raising money for his campaign, the latest step in an ongoing skirmish over transparency with Democratic rival Sen. Elizabeth Warren.

Reporters will be allowed into Buttigieg’s large-dollar fundraising events starting Tuesday, and the South Bend, Ind., mayor will release a list of his “bundlers” — those who funnel large sums of money to campaigns — within a week, according to Buttigieg campaign manager Mike Schmuhl.

“From the start, Pete has said it is important for every candidate to be open and honest, and his actions have reflected that commitment,” Schmuhl said in a statement….

In the earlier days of my time on James Smith’s campaign, I found myself turning press away from fund-raisers, because that was what the staff wanted to do. I thought it was a rule — one I did not like.

I hated not having the press at these events, sometimes more so than other times. For instance, there was the big event in Greenville on Sept. 17 that had been put together in part by some folks who usually backed Republicans. It was a tremendous event under any circumstances. It was even more important because it was our first event after taking a hiatus because of the hurricane, and it would have been enormously helpful at that moment to have coverage of such an enthusiastic crowd gathering for us in the heart of Republican country.

As it was, an Upstate reporter did a story on the fact that the event was happening, and that caused some positive buzz for us, briefly. But it would have been so much better if we’d had actual coverage, with pictures.

We needed that bounce at that moment. I don’t know if it’s right or not, but there’s a school of thought (to be more specific, one very smart person said it to me shortly after the election, and I think she may have been right) that our week-long pause for the storm — during which we went dark, while Henry was constantly on live TV in a leadership role — killed our campaign. Before it, we were within the margin of error of a tie in polling (and rising, or so it felt); after it we had lost ground and never recovered.

There had been previous events where I’d wished we’d had coverage — including some reporters had specifically asked to cover, and I’d turned them away at the behest of colleagues. But after the Greenville event, I decided to try to change the rule. And when I brought it up to the candidates themselves, James and Mandy immediately said yes.

(Editor’s note: Before posting this, I sent a copy of it to James. I just wanted to make sure I wasn’t saying anything about the campaign that made him uncomfortable. His response was, “If the press was excluded that was done without our knowledge. Those were great events and I liked having the press there.” So did Mandy, he added. I guess I should have mentioned my beef with the policy earlier, now that he points that out. I didn’t know he didn’t know.)

Now let me be clear: This is not a case of Brad Knows Best, or if only they’d listened to me…

In fact, on this thing they did listen to me, and we lost anyway. If anything, it looks like I’m to blame for not challenging this “rule” sooner, since it turns out James and Mandy were unaware of it, and agreed with me. So Brad should have gone with his gut to start with.

Why didn’t I? Remember that I was the amateur in this campaign, and before I came on board the staff was operating according to rules that a lot of professionals see as best practices. And from what I gathered, not letting media in to fund-raisers fits into that category. I’d seen it enough in other campaigns. I’ve never fully understood the rationale; maybe it was because of horror stories like Mitt Romney’s 47 percent debacle. (Of course, that’s only a problem if you have a candidate who will say stupid stuff like that.)

But my fellow staffers were the pros, and I respected that. The only professional qualification I had was experience as a journalist covering campaigns (and as an editor supervising people who covered campaigns). And the way the press was covering our campaign made me want to bang my head against a wall. Just one story after another about staffing and strategy and ad buys. I wanted to change the subject to why people would want to vote for James and Mandy, so I wanted reporters at events full of people who could and would eagerly speak to that. Also, I wanted the reporters to feel the vibe in the room. Maybe, just maybe, some of that would creep into the coverage.

Anyway, all that is to say that I think Pete is right to open things up. I applaud it. Of course, my man Joe was already letting the press in… 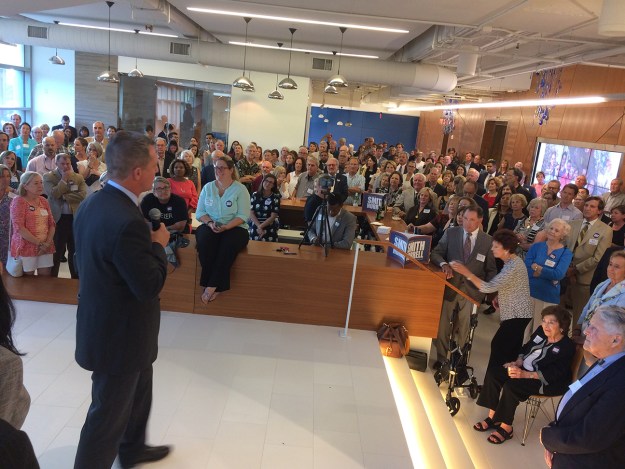 3 thoughts on “Yes, Pete: By all means, let the press into your fund-raisers”