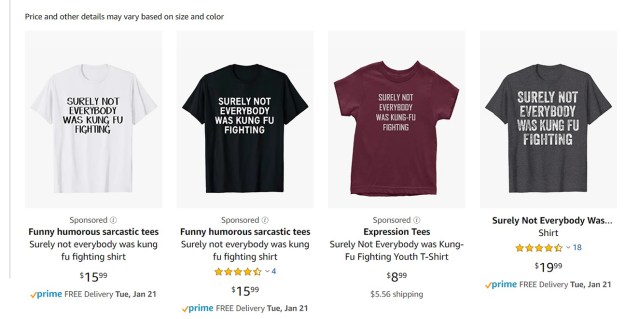 This morning there was this huge Google Adsense ad spread across the top of my blog, right under the header (this one), for something called “Chummy Tees.”

There was no picture, so, wondering what was being promoted on my blog, I Googled the company (I didn’t dare click on the ad, as Google forbids me to do that). And I saw, among the rather plain, gray tee shirts being promoted, one that said “SURELY NOT EVERYONE WAS KUNG FU FIGHTING.”

And that cracked me up. I might be meaningless to people too young to remember the song, but I loved it. A perfect low-key joke for, say, an editor — someone who has spent most of his adult life keeping reporters from making extravagant statements that can’t be backed up. (Which is another way of saying you might not find it funny, but I do.) 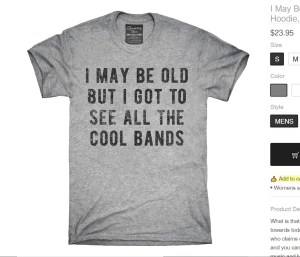 I kind of liked this one, too.

I wasn’t going to shell out $23.95 for the shirt, of course. I’m neither crazy nor made of money. But… maybe I’d like to put it on my Amazon list. So I go to Amazon — I didn’t have to hunt for it because I already had a pop-up window from Amazon begging me to go there for such shirts — and it seems that while everyone may not be kung fu fighting, everyone seems to make a sure with that line (although all these used “everybody” instead of “everyone,” which is truer to the song).

And it got me to thinking, and not for the first time, that in the Internet age, we are no longer allowed to delude ourselves into thinking we have had an original thought. You think of something clever — something that in eras past you would have congratulated yourself for coming up with, convinced that you were quite the wag — and then for whatever reason you Google it, and you find out an army of people got there before you.

And this is frustrating. It fosters fatalism — why even TRY to come up with something good?, you ask yourself.

Yesterday on a podcast I was listening to, there was a discussion of the many ways that the internet casts a pall on our lives, bringing ills previously unimagined, and making us dread the future.

Add this to the list. It takes any small attempt to be original, and slams it to the ground.

And it makes you doubt there was ever anything such as originality. We may have thought we were clever, but that’s because we didn’t have the Web to set us straight. Each time you patted yourself on the back for a happy thought back in, say, 1975, there were a million other people out there having the same thought and thinking they were clever, too.

And we were all happier…

6 thoughts on “Is originality dead? For that matter, did it ever exist?”