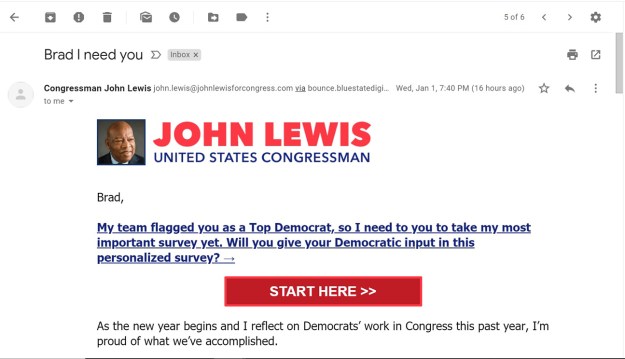 Having made all sorts of virtual connections as James Smith’s director of communications last year (no, wait — it’s now the year before last!), I’ve grown used to emails such as this one, ostensibly from John Lewis, who as you know is very ill:

My team flagged you as a Top Democrat, so I need to you to take my most important survey yet. Will you give your Democratic input in this personalized survey?

I’m just this guy, you know. A voter. One who looks at teach candidate in each race and does his best to discern whether he or she would do the best — or the least-bad — job in the office in question. I’m a thing undreamt of in your philosophy.

But I’m not unusual, even though so many people involved in politics (and so many who cover politics) act as though I were. There are a lot out here like me. That’s something Joe Biden understands, which is why he says sure, he’d consider a Republican running mate.

Which is an indication of why he’s the one guy running who speaks my language. Just as James Smith was in 2018. James ticked off some Democrats when he picked me to be his spokesman. I hear some Democrats are ticked off now at Joe’s openness to running with a Republican — and by the way, that’s all he said: that he’d be open to it.

James’ openness was an invitation that not enough independents or Republicans took him up on — which was their, and our, loss.

But some of us yearn for that openness, because framing everything as us against them is a dead end for the country. If any of you Democrats doubt that, reflect on the fact that that way of thinking is the main reason Republicans have thrown principle to the winds in their defense of Trump.

What this country desperately needs right now is some open-mindedness among Republicans. That may be too much to hope for right now, but at least there’s a Democrat willing to show them how that’s done…