Just moments ago, in my previous post, I wrote the following:

We know, thanks to the clever people who figured out stuff like quantum foam, that the universe tends toward entropy. Well, this one also tends toward stupidity…

Right after that, I proved my theory by taking the Slate News Quiz: 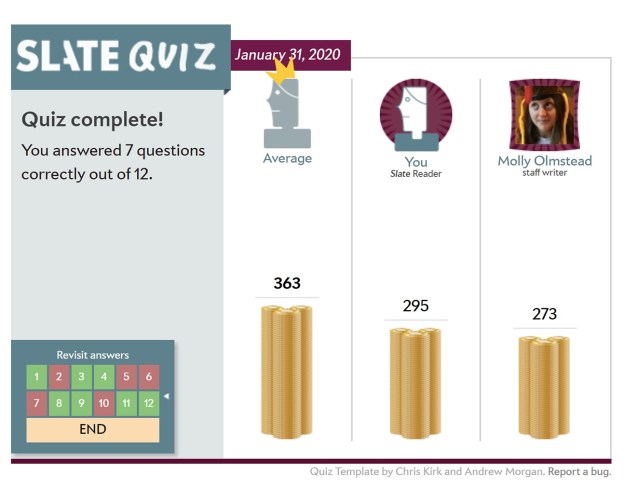 You see? Not only am I, apparently, now dumb as a rock (and more so than I was in the past, in keeping with my theory), but that person at Slate is even dumber.

Oh, you’re going to say that the fact that the average was higher proves that not the whole ‘verse is as dumb as Molly and me?

Well, that just makes me chuckle condescendingly and tell you that that is evidence of another universe — one where people are slightly smarter — interfering with this one. I’d quote from Timeline to ‘splain to you how that works, but since you live in this downward-spiraling universe, you wouldn’t understand it….

13 thoughts on “See, I TOLD you we were all getting stupider”