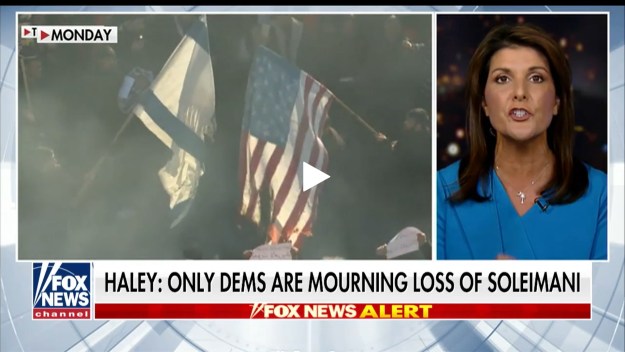 And he has a point.

It seems our girl, so fresh from tarnishing her own fine record on the Confederate flag, has stepped in it again. Not sure why she keeps doing this. Does she feel she’s not in the limelight enough these days?

Anyway, Bruni said this in his latest email newsletter, under the headline “Don’t you dare question my patriotism:”

In the aftermath of the killing of Maj. Gen. Qassim Suleimani, she didn’t merely praise President Trump — a show of support that may well reflect her own, like-minded assessment of events and is absolutely her right.

She denigrated Americans who took a different view by disingenuously describing their reaction. “The only ones that are mourning the loss of Suleimani are our Democrat leadership and our Democrat presidential candidates,” she told Sean Hannity during an interview on Fox News. Of course he thrilled to that characterization…

Nikki’s point seems to have been the usual thing about partisanship stopping at the water’s edge. And there’s value in the usual thing, when we have a usual sort of president. Which we did, with the first 44.

But our situation now is as different as ones and zeroes from what we had before 2016.

As I said earlier, as we try to apply the usual standards for whether killing Soleimani was a good thing or a bad thing, we just can’t forget for a moment that this is Trump who decided to do this. And it is impossible to give him the benefit of the doubt, ever. This is a startlingly ignorant, narcissistic, unprincipled, impulsive, vindictive man who doesn’t know what truth is, who has no notion of the national interest, and is motivated entirely by what he sees as benefiting him personally, or stroking his pathetically fragile ego.

Not that he’ll never do what’s best for the country. He’ll do that if it is coincidentally the thing that he sees as benefiting him. He’s like a stopped clock that way.

To pretend we are living through a normal political era in which the usual maxims apply is to lie to yourself and to the American people.

And we get enough of that already from the White House.

Nikki Haley managed to extricate herself from the Trump administration with her image as Golden Girl of the GOP relatively untarnished. Now that she doesn’t work for him any more, she should keep her distance, if she’s serious about the future ambitions we keep hearing about.

She’s better off not trying to be Trump’s Yes Girl. Anyway, he’s got Kellyanne Conway for that…