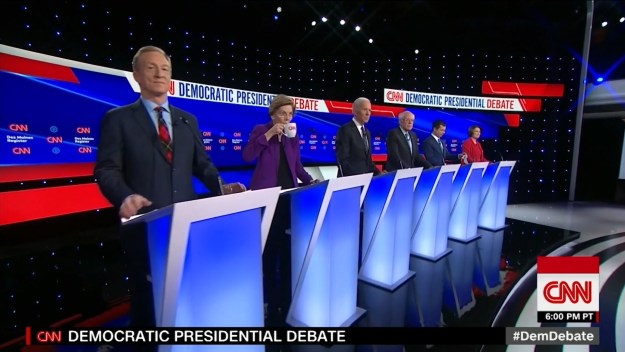 Did you watch it? I watched about half of it, caught up on what I’d missed by reading written accounts this morning. I didn’t expect to learn anything new, and I didn’t.

Joe Biden is still the one candidate for me, and increasingly the voters in Iowa seem to be agreeing, after flirting with other possibilities. Not that I care, normally, what all those white people up there think. I’ve been to Iowa. Covered the GOP debate there in 1980. Slid around in the ice a good bit. Flew through an ice storm in a four-seater airplane. Not overly impressed.

Joe did fine. Nobody else made any particular impression that he or she had not made before. Bernie and Elizabeth had me about to start banging my head against a wall with their idiotic back-and-forth about whether Bernie had, or had not, said something about the electability of women. But I got through it. I seem to recall that there was another thing just as stupid that a couple of the candidates got into during the last debate, and I’ve managed to forget what it was, so there’s hope for the future.

That’s about it. Your thoughts?