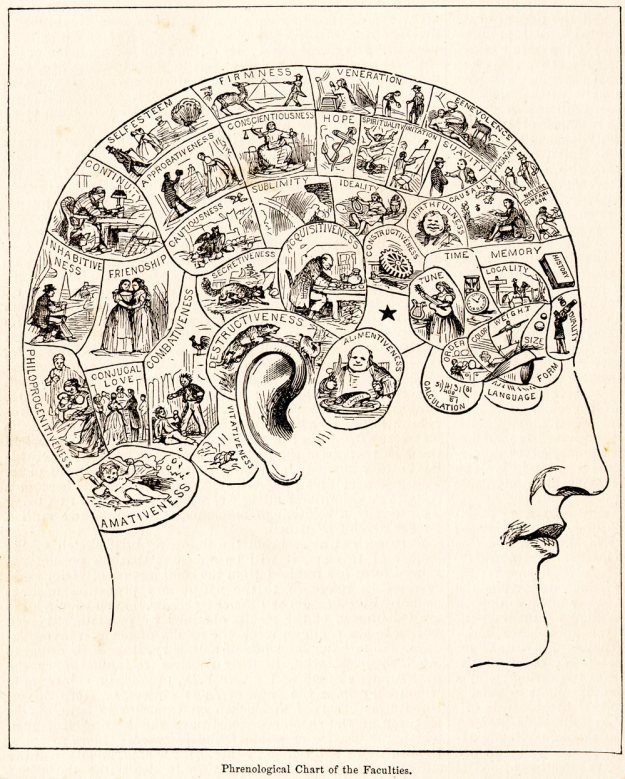 I love the “technical, scientific” terms on this phrenology chart. I think my fave is “ALIMENTIVENESS.”

I’m ready for a nap.

I had two big cups of coffee before going to the dentist this morning to get a new crown put in. But I’m still ready for a nap. Seriously. I’ve got a third cup of coffee here in a travel mug, and I’m going to try to get it in me if I can do so without slobbering it all down my white shirt, on account of the numbness.

I had three shots of novocaine — or whatever they use these days, which is why I’m not capitalizing the name of the drug; I’m trying to suggest genericness. Genericity. The state of being generic. Whatever.

They weren’t going to give me anesthetic originally. They were just pulling off the temporary crown I’ve had a couple of weeks and popping the permanent one into its place. But every time the lady went to pry the old one off, it would hurt a bit at first, and I’d think I could take it, but when she started wiggling it the pain shot from a one to about a five in less than a second, and I’d go AAAAHHHHHHH! to make her stop before it went higher.

So the dentist gave me a couple of shots, which had no effect. I could feel the side of my face going a little numb, but not the gum area where the crown was. The technician’s subsequent efforts to remove the temporary produced more AAAAHHHHHHHs!

So he gave me a third one, and that did the trick. I’m comfortably numb on that whole side of my mouth, and I’m feeling the tingling as high as the top of my cheekbone.

And I’m sleepy. Groggy. Drowsy. I’m feeling this way even though the internet isn’t really backing me up on this being a thing. And I’m supposed to be getting work done.

Oh, well. I figure it’ll wear off by lunchtime. I generally eat lunch kind of late. Today, I’ll have to…

2 thoughts on “Can novocaine affect your brain? I think so. But then, I’m not thinking all that clearly at the moment…”