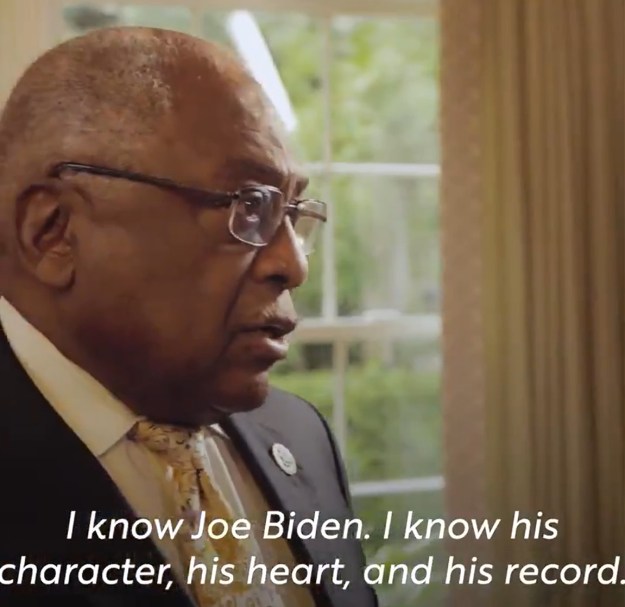 Still from a video posted on Biden’s Twitter feed today.

You think I’m being overly dramatic there? I’m not. This is a dangerous moment for our country, and only thing that will save us from it will be Joe Biden winning on Saturday, and going on to do well on Super Tuesday.

And this is now about much more than me liking Joe Biden. It’s now increasingly about the alternative.

I thought Tom Friedman put it well in his column today (more about that column later; it was a really good piece):

If this election turns out to be just between a self-proclaimed socialist and an undiagnosed sociopath, we will be in a terrible, terrible place as a country. How do we prevent that?

That’s all I am thinking about right now…

So it matters that Clyburn stepped up at long last today and endorsed Joe. By the way, I’m not complaining when I say “at long last.” I really think his endorsement came at the best possible time. If he had given it months ago when everyone else (and I mean everyone else who’s anyone among S.C. Democrats) was endorsing Joe, it would have been forgotten by now. Now, whatever effect it will have is amplified.

The AP story today claimed that “It had long been expected that Clyburn, the House majority whip, would support Biden.” Really? Then how come I didn’t know it? If you’d made me bet, sure, I would have said Jim would back Joe. But I also would have said we wouldn’t be calling Bernie Sanders a front-runner at this point, and that Donald Trump wouldn’t have been the GOP nominee in 2016.

So I don’t rest easy with conventional wisdom these days. And as an American and a South Carolinian, I’m very grateful to Jim Clyburn for what he has done this day.

There was some suspense over this, at least for me. Just a couple of days ago, The New York Times had a prominently-played story that suggested Clyburn might have a liking for Tom Steyer. It was another one of those stories about Steyer’s efforts to buy the black vote here (something I remain very concerned about). It quoted Clyburn as telling CNN, “I think Steyer is doing an incredible job.” Which is far short of an endorsement, but it still made me nervous.

Anyway, Jim Clyburn has done a fine thing today — for Joe Biden, for the Democratic Party, for South Carolina, and for America. And I appreciate it.

7 thoughts on “Clyburn stands up for America, backs Joe Biden”