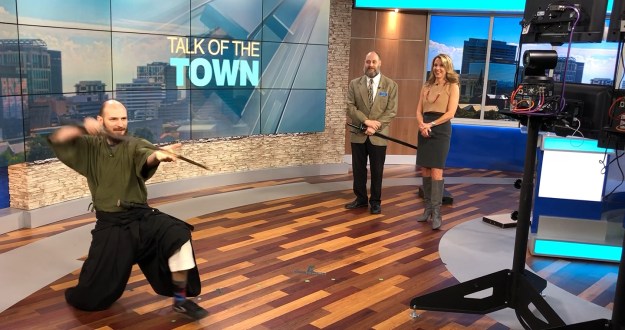 Dan demonstrates the katana for Joe and Dawndy.

I don’t always remember to tell y’all about cool things going on at the Relic Room — a client of ours — but I’d truly be remiss if I didn’t give you a heads-up about SwordFest.

I went over to WIS today with Curator of Education Joe Long and Dan Bernardo of WellWithin Martial Arts so they could do a live segment on Dawndy Mercer Plank’s lunchtime show. And it was fun. Dan gave a quick-but-deadly-looking demonstration of his skill with a katana, just one of many bladed-weapon techniques you will see demonstrated on Saturday.

That’s just one of many sword styles from history you’ll see at the event, but a particularly relevant one. It’s a little-known fact (he said, channeling Cliff Clavin) that the oldest artifact at the museum is a katana made in about 1600 that was captured by a South Carolinian at Iwo Jima.

Here’s the release about the event. I’m going to be there. I hope to see some of y’all:

COLUMBIA, S.C. – On Saturday, Feb. 8, the South Carolina Confederate Relic Room and Military Museum will again come alive to the clanging and schwinging of swords.

All kinds of swords. Basically, if it’s got a blade and a hilt, you’ll see it in action or on display at the museum’s third annual SwordFest.

And it’s all free and open to the public, all day long.

The doors open at 10 a.m., and here’s the schedule. All are in the Atrium except for the first and last, as noted:

10:15 a.m. – “Wade Hampton: Battlefield Swordsman.” This lecture by Education Curator Joe Long, about South Carolina’s most famous hand-to-hand warrior, will be delivered in the Education Room.

12:15 p.m. – Lightsabers! Trey Jones and members of the Aiken Lightsaber Club will present the techniques of the Jedi, including a choreographed lightsaber duel.

1 p.m. – Art of the Katana. Dan Bernardo of WellWithin Martial Arts of Columbia will show the Japanese approach to sword usage through the stylized, and lethal, techniques of traditional kenjutsu.

1:30 p.m. – Kids’ Demo: “How to Fight Off Pirates!” The basics of naval cutlass techniques explained in an interactive session for youngsters. (And yes, the “blades” they use will be safe simulators, not the real thing.)

3 p.m. – “The South Carolina Broadsword System.” Historical researcher and swordsman Benjamin Battiste explains the unique broadsword style taught in our own state during the first half of the 19th century. This will be in the Education Room.

Local, historical, worldwide and intergalactic swashbuckling. You can’t ask for much more than that!

And here’s a video about the event. It includes some brief clips from last year’s SwordFest:

3 thoughts on “Come on out for SwordFest 2020 on Saturday”