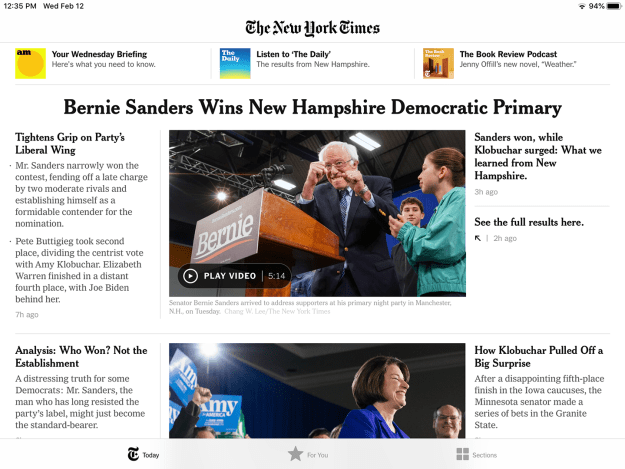 My NYT app this morning.

One can sometimes see why there are so many people in this country who can’t stand the news media.

I can get pretty peeved with them myself these days.

There are two phenomena that particularly irritating. Or maybe they’re just one:

The last two weeks, it has been astounding the degree to which the media — both straight news and opinion — have been trapped in what’s happening right this second. It has always been thus, but the pace of reporting and the orientation toward social media has made the problem far, far worse.

Instead of a considered, consistent narrative over time, the picture we get of what’s happening is so immediate, it has no value beyond a few moments:

Meanwhile, Biden was having a very nice rally here in Columbia before an enthusiastic crowd. And as a Biden support, I would prefer that he had done better among those uber-white people in Iowa and New Hampshire, but as far as I’m concerned, the race is just getting started.

Of course, when Joe wins here, we’ll be seeing:

And then, Super Tuesday will roll around, and South Carolina will be forgotten and it will be all about Bloomberg or something.

The other thing is that so many people out there seem incapable of seeing what happens in this brief moments within any sort of larger context.

My favorite example of that today is a headline that trumpets, “Bernie Sanders Has Already Won,” followed by the subhead, “Whether he captures the White House or not, he has transformed the Democratic Party.”

Uh… no, he hasn’t. First, he didn’t do nearly as well as he did four years ago. I think it’s early to completely dismiss him, but if you go by that one bit of info, his time may have passed.

Second, and most importantly, if we’re going to draw conclusions based on something as thin as the New Hampshire vote, consider: The three candidates appealing to the moderates who utterly reject Bernie’s revolution got a total of 52.6 percent of the vote, compared to Bernie’s 25.7 percent.

They crushed him. They demolished him. They utterly rejected him. Even if you give him Elizabeth Warren’s 9 percent on the assumption that her voters might switch to Bernie, he got massacred.

The real story here is that the moderates just can’t make up their minds. If and when they do, we won’t be hearing any more about the triumph of Bernie.

I — and a lot of voters here in South Carolina — still believe that they would be wisest to line up behind Biden because he’s the one most likely to beat Trump. And nothing is more important than that.

They just haven’t wanted to accept that yet. I get it. I like Pete and Amy, too. But I’m going with the guy most likely to win. And I still remain hopeful that other moderates — sensible folk that they are — will reach that conclusion, too.

6 thoughts on “For what little NH is worth, Bernie got CRUSHED by the moderates”