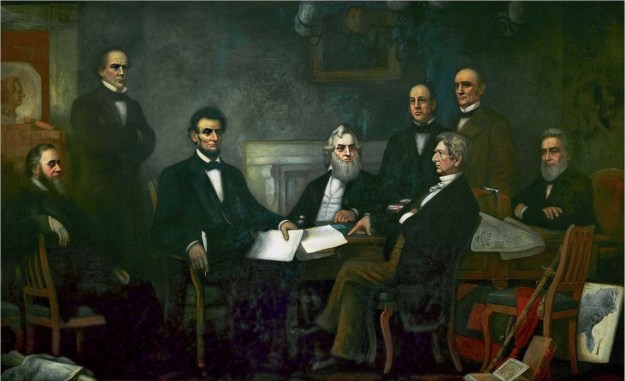 It worked for Lincoln.

Earlier today I mentioned that Tom Friedman had a really good column today in The New York Times.

I noted that he said that if we are forced to choose “between a self-proclaimed socialist and an undiagnosed sociopath, we will be in a terrible, terrible place as a country.”

Very true. The nice thing is, he offered a way out of that.

It’s far-fetched — it would require a very diverse groups egos to set aside their personal ambitions for the good of the country — but at least it’s an idea that would work if they did. And I think Friedman’s not exaggerating when he says, “Dems, You Can Defeat Trump in a Landslide.”

Basically, it’s this: form a Team of Rivals, as Lincoln did in a previous time of national crisis. Put all those Democratic candidates, those still running and some of those who have dropped out, on the team. Bring all their strengths together and let them compensate for each others’ weaknesses.

It’s a great idea now as it was in Lincoln’s day (although when I read Doris Kearns Goodwin’s book, I kept wishing for a time machine so I could go back in time and slap Salmon Chase upside the head — that guy was a major pain).

Friedman got one thing wrong: He supposes the head guy would be either Sanders or Bloomberg. I’m still holding out for Joe. But he also assigned Cabinet positions to Sanders and Bloomberg, since he hadn’t made his mind up on which is president.

And he made a call that supports my position: He picked Joe for secretary of state, because “No one in our party knows the world better or has more credibility with our allies than Joe.” Absolutely, which is why he needs to be president — because nothing in the POTUS job description is more important than dealing with the rest of the world.

This is a variation, and elaboration, on an idea I put forward several months ago: I suggested that Joe persuade Barack Obama to be his secretary of state, and tell the country that right away. It would clarify things in Democrats’ minds — and in other people’s as well.

But yeah — if you couldn’t have Joe as president, then secstate would be the job for him.

Anyway, the overall idea is a consummation devoutly to be wished.

That’s one idea from the Friedman column. The other is less uplifting, but must be faced. And it’s important enough that I’m writing a separate post about it.

2 thoughts on “Friedman idea no. 1: the Team of Rivals”