Here’s the less pleasant item from that Friedman column I liked this morning.

I mentioned in my last post his idea that the Democrats should band together in a Team of Rivals that would defeat Trump in a landslide, and I think they would — if they could put aside their differences and do it.

Friedman even spelled out who should play what position on that team. When he was done, he set out another idea. He cited something John Boehner said back in 2018: “There is no Republican Party. There’s a Trump party. The Republican Party is kind of taking a nap somewhere.”

Taking off on that, Friedman wrote: 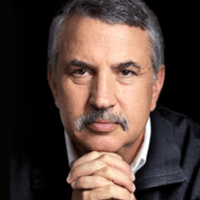 And I will tell you the day it died. It was just last week, when Trump sacked [Acting Director of National Intelligence Joe] Maguire for advancing the truth and replaced him with a loyalist, an incompetent political hack, Richard Grenell. Grenell is the widely disliked U.S. ambassador to Germany, a post for which he is also unfit. Grenell is now purging the intelligence service of Trump critics. How are we going to get unvarnished, nonpolitical intelligence analysis when the message goes out that if your expert conclusions disagree with Trump’s wishes, you’re gone?

I don’t accept, but can vaguely understand, Republicans’ rallying around Trump on impeachment. But when Republicans, the self-proclaimed national security party — folks like Lindsey Graham, Marco Rubio and Tom Cotton — don’t lift a finger to stop Trump’s politicization of our first line of defense — the national intelligence directorate set up after 9/11 — then the Republican Party is not asleep. It’s dead and buried.

He’s right. If the party of principled men from Lincoln to John McCain hadn’t died already — when Trump became its standard-bearer, or when the Republican Senate rolled over for him on impeachment — this latest outraged surely would have marked the end.

As we mourn it, I’d like to raise another alarm: If the Democratic Party allows the same thing to happen to it that happened to the GOP in 2016 — letting an extremist with minority support gain its nomination because the majority couldn’t line up behind a single more moderate candidate — it’s going to be on its last legs, too.

If our nation is faced with the horrific choice “between a self-proclaimed socialist and an undiagnosed sociopath,” as Friedman describes it, both parties will have failed the country.

At that point, instead of having two near-center parties that have the potential to govern with something approaching consensus — or at least acceptance by the people — we’ll have zero.

11 thoughts on “Friedman idea no. 2: The GOP died last week”