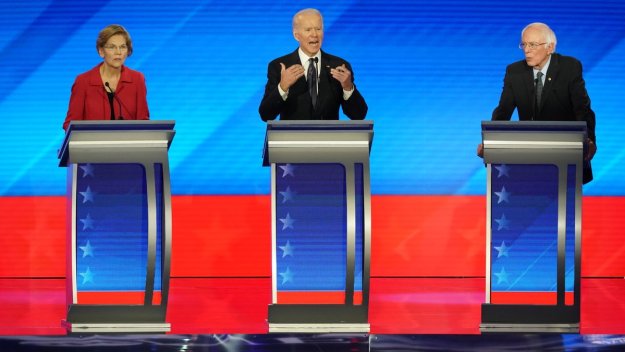 In his daily enewsletter, David Leonhardt poses this question:

Many Democrats haven’t enjoyed the past week. It started with the Iowa chaos, and went on to include President Trump’s State of the Union address, his acquittal, his vindictive celebration of that acquittal and a few polls that showed his approval rating rising.

How should Democrats respond? My column today tries to answer that question, by arguing that Democrats will be hurting themselves, and the country, by exaggerating the differences between progressives and moderates.

The current moment, when nobody knows how the primaries will end, is a good time for both sides of the Democratic Party — left and center — to ask themselves how they’ll respond if their side loses the nomination. Reacting negatively would be a big favor to Trump. I instead ask both moderates and progressives to think about the strengths of the other side of their party.

Hey, I’ve thought about it, and my answer is this: If Joe Biden loses, I’ll prepare for four more years of Donald Trump as president of my country. Or what used to be my country, perhaps I should say.

Of course, Leonhardt isn’t talking to me. He’s addressing Democrats. His column’s headline is, “The Question All Democrats Need to Ask Themselves.” But I get used to that. I long ago grew accustomed to too many people, and definitely too many journalists, assuming that the world only consists of two kinds of people, and that therefore the only people concerned about Donald Trump dragging our country through the gutter are Democrats. (This is particularly strange because he talks so often with Ross Douthat — they do a podcast together every week. You’d think he’d realize, “Hey, maybe there are more people like Ross?”)

It’s a thoughtful column, inspired in part by my friend E.J. Dionne’s latest book, Code Red. And he makes a good point when he writes:

A Sanders or Warren presidency would have more in common with Dwight Eisenhower’s presidency than a second Trump term would have with either of them….

Good point, as I say, but not very comforting. But it does make me think: Why can’t one of our two political parties come up with an option as attractive as Ike? Or Adlai Stevenson, for that matter?

The closest we can come to the kind of sanity Eisenhower and Stevenson offered is Joe Biden.

Yeah, I know, there are other “moderate” choices: Buttigieg and Klobuchar. But I don’t see either of them winning the general election. I just don’t. I also think it’s kind of nuts to nominate either of them when you have Joe Biden available, whose experience is light years beyond Mayor Pete’s. The experience gap is not quite as great with Sen. Klobuchar, but I don’t see her as being as likely to get the nomination, either.

And if it’s Warren or Sanders, Trump wins in a walk.

Donald Trump is an idiot, but again and again he demonstrates a sort of animal cunning with regard to what it takes to win — or at least, what it takes to keep his base behind him and motivated.

And that low, Hobbesian instinct caused him to betray our country’s interests in an effort to bring down Joe Biden. That’s the guy he doesn’t want to run against. And he’s right to see it that way.

After the farce of Iowa, everyone’s trying to write Joe off. Not the sensible people, of course, but a large coalition of others, from ideologues to journalists, who’ve been itching to write Joe’s political obit from the start.

Listen, folks. Here’s the way I’ve looked at it from the start: I didn’t really expect Joe to win Iowa, and wasn’t particularly optimistic about New Hampshire. I’ve been holding my breath waiting to get through those ridiculous, unrepresentative contests, hoping we could get to the point that the rest of us, most of the country, could have a say in the matter.

And what’s happening? The wave of negativity out of Iowa, and increasingly out of New Hampshire, is reportedly causing cracks in Joe’s South Carolina firewall. Although I’m not seeing it yet.

But folks, if he doesn’t succeed here and beyond… well, I’m telling you, and no malarkey: Get ready for four more years of Trump…,

45 thoughts on “If my guy loses, I know exactly what I’ll do: Prepare for four more years of Trump”