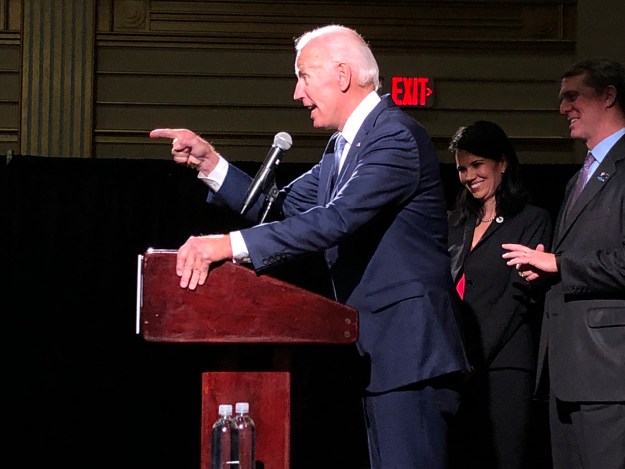 Joe Biden campaigning with us in October 2018.

In some very important ways, the Joe Biden campaign for president in South Carolina is, in my view, a continuation of the James Smith for governor campaign.

It’s not just that James himself is supporting Joe, as Joe supported him. At the recent Biden event at 701 Whaley, I was struck by how many of our key people from the 2018 campaign were continuing the mission by supporting Joe. It’s something I’d been aware of for some time, but hadn’t really thought about for a simple reason — it just seemed the most natural thing in the world.

At the top, you have Kendall Corley — who was our political director in 2018 — heading up Biden’s campaign in South Carolina. And Biden’s state political director is Scott Harriford, who was James’ driver and “body man” in 2018, and held the title of deputy political director. Scott was the first person James hired for the campaign, back in the summer of 2017, and was right there at his side from then through Election Day. (I thought I had an intense, whirlwind experience those last eight days on “the bus,” but Scott had been doing it for way over a year.) 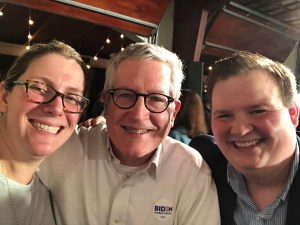 Smith campaign alumni Ashley Medbery Floyd, me, and Noah Barker at a Biden event on Feb. 11.

At the 701 Whaley event I ran into Noah Barker, who assisted me with social media in 2018. Noah, who I think has reached the ripe old age of 19, is now working for the Biden campaign while attending college.

And while she’s not actually working in the Biden operation — she’s helping Jaime Harrison run against Lindsey Graham instead — Ashley Medbery Floyd, our finance directer in 2018, was at the 701 event, too. She and Noah and I marked the occasion with a selfie.

All this is natural because, well, there is such a bond between Joe and James. Their shared values are such that I don’t see how anyone who really believed in James in 2018 — and as his communications director, I certainly did and do — could possibly do anything but support Joe.

One of the things that drove me nuts back during the campaign was the way the political reporters went ape over anything having to do with 2020 presidential candidates coming through the state. They’d call me and ask what we’d be doing together with so-and-so on his or her swing through the state, or what we had to say about it, and it would put me in a bind. We didn’t want to say anything unkind about these national Democrats, but at the same time, we couldn’t have cared less about their visits. They were here for themselves, not for us.

But not Joe. Joe was our guy, and we couldn’t wait to see him. We knew he was coming, and we were really disappointed when he had to postpone his initially planned event because of complications related to the hurricane. But finally, on Oct. 13, he came down to Charleston to do a fund-raiser for us, and it was possibly the best day of my time on the campaign. And I could tell it was a high point for everyone else. (It was such a big deal that upon arriving in Charleston, Campaign Manager Scott Hogan went to a shop on King Street and bought himself a suit, and wore it to the event. You have to know Hogan to get what a big deal that was. He normally dressed like a guy about to go out and mow the lawn.)

Anyway, I could go on and on about the way one campaign flows into the other, but I have a point to make here, and it is this: If you voted for James, if you believed in James, you should believe in Joe Biden, and vote for him. I don’t see how you work it out any other way.

James is not authorizing me to say this (I haven’t asked him). I’m saying it myself.

As communications director, I think I have as good a grasp of what the Smith campaign was about as anyone does. It was a campaign for all the people of South Carolina — black, white, old young, male, female, Democratic, Republican and independent. It was a campaign that would Leave No One Behind.

And Joe is running the exact same kind of campaign for the soul of the nation.

One more point, an elaboration on that one: Maybe James Smith isn’t your favorite Democrat. He should be, but maybe he isn’t.

Still, if you are a Democrat, or someone who frequently votes for Democrats, you should take note that pretty much every Democrat you have nominated and/or voted into statewide office in the past 20 years and more is supporting Joe Biden for president. And for good reason.

I’m talking not just James, but Vincent Sheheen, who was your standard-bearer twice.

And Dick Riley, the last Democratic governor before Hodges. (And speaking of great public servants with that name, the greatest mayor of his generation in the country, Joe Riley.)

And Inez Tenenbaum, the last superintendent of education who was (and still is) a Democrat.

Now, Jim Clyburn — the current highest-ranking Democrat in the state, and one of the most powerful in the country — has joined that list. And it’s a long list. The Post and Courier put most of it together a few weeks ago, before Hodges had come out for Joe.

These are people who embody the heart, the core, of what it means to be a Democrat in South Carolina. No one could be more in touch with what South Carolina Democrats care about.

Still speaking to Democrats and people who sometimes vote for them here (let’s call you DAPWSVFTs for short)… These are all people you have believed in in the past, in whom you have placed your trust. Scoff at endorsements all you like, but I’m telling you these are smart people who know these candidates, who know the country and its needs, who know South Carolina, and they are for Joe. They’re putting their reputations out there in support of him, and you might think that’s a small thing, but it isn’t.

These people know what they’re about, and they’re for Joe. And most of you DAPWSVFTs have indicated your respect and support for these people in the past. These are people who share your values.

So it makes all the sense in the world that you would join them in voting for Joe Biden for POTUS on Saturday. 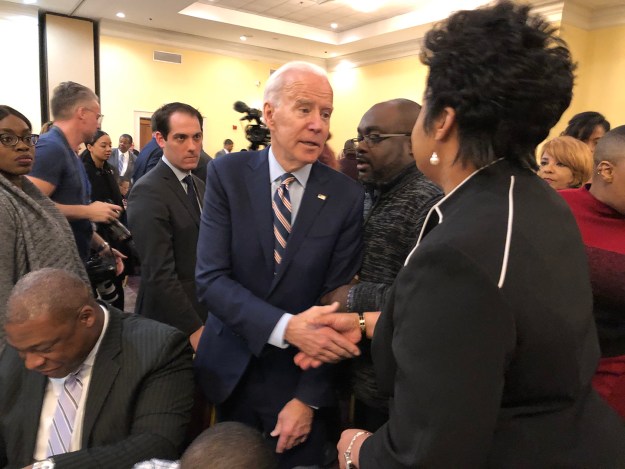 That’s Smith campaign veteran Kendall Corley whispering in Joe’s ear as he works a crowd on MLK Day in Columbia.