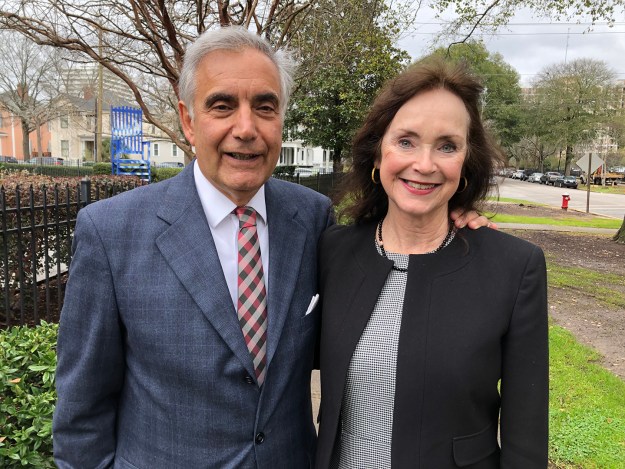 In recent months, I’ve done more and more of my 11,000 steps a day walking around downtown during the day, and less on the elliptical in the morning.

One of the great things about that is running into friends.

Today, as I was walking along the edge of the USC campus — heading east on Pendleton Street — I encountered Harris and Patricia Moore Pastides!

As you can see, they’re looking great, and I can also report that they’re doing great. In fact, I should be doing so great.

Patricia admired the Irishness of the cap I was wearing, and I thanked her and told her I’d bought it outside Killarney last year. Then I learned that they’re about to go to Ireland, too, and they’re going to do it right. They’re not going to hustle about the country the way we did, but stay in one place — I think they said Dingle, which like Killarney is in County Kerry, right on the coast — and just go out hiking about from there!

Which is exactly what I’m going to do when I die and go to heaven. Or at least, when I wear out the two hats I bought and need another.

Anyway, it was great to see them, and I hope they have a trip that’s just as great as it sounds like….

One thought on “Look who I ran into! Harris and Patricia, and they’re doing great!”