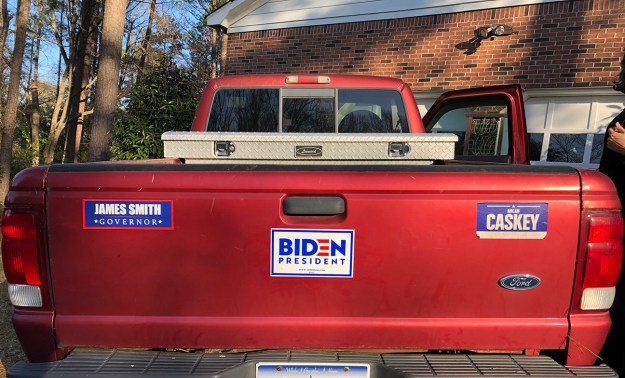 Having shown you my yard signs, I figured I’d show you one of my bumper stickers… especially since I know y’all have been breathless with anticipation ever since I wrote this post.

(Hey, at least y’all took an interest in that one. It got more than 50 comments, and I can’t scare up an audience this week for love or money. Where’d y’all all go?)

As I wondered what to do several months ago, I wrote:

Anyway, now I have to figure out where to put my Biden sticker. My first thought is to put it right in the middle, but then my tailgate will be 2/3 Democratic. Which is not the effect I’m going for. But then, does that matter, since Joe is running in the Democratic Primary? I mean, what do I care what Republicans think in this context? Worrying about being perfectly bipartisan is more about worrying about what people think of ME, isn’t it? And that shouldn’t be a factor.

I could put it over the Smith sticker, since the campaign’s over and all, but I won’t do that. My experience last year is something I’m proud of, and I’m going to continue to wear it on my sleeve. Or tailgate.

Anyway, look how shiny and new it still is. It looks good. By contrast, Micah’s sticker has faded considerably…

I saw Micah this morning, and I guess I should have asked him for a fresh one to replace that one. You can’t see the red strip where it says, “Republican.”

You see that I did what I was thinking about back then — put Joe right in the middle.

I think it looks good there…

5 thoughts on “Oh, and here’s where I put my bumper sticker”