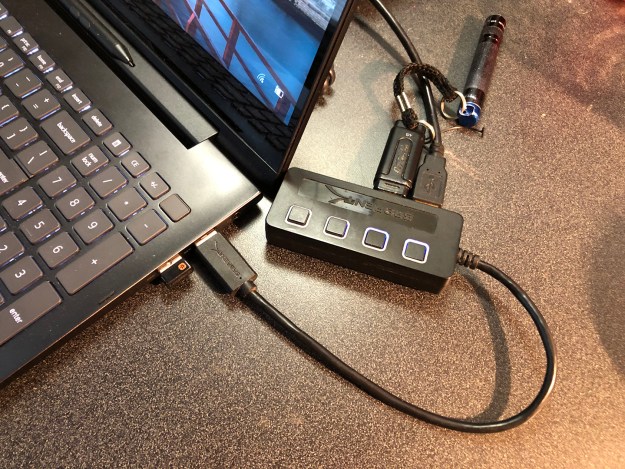 As technology progresses, our devices have more and more features, something we’ve come to expect. We don’t have flying cars, but our phones do cool things.

But today I’m kind of frustrated that computer makers keeping taking features away.

Sure, mostly the stuff they ditch is stuff we don’t need any more. Like floppy disk drives. But even then, I hate to see them go. The first time I went to buy a computer after that trend started, I paid extra to have a floppy drive added in a vacant drive slot of the desktop.

But I only did it that once. On the next few machines I bought, I didn’t fret about the lack of such a feature. It still bothered me, though, that I had shoeboxes full of floppies containing data I could not access. Finally, a few months ago I bought an external floppy drive from Amazon — it only cost about 10 bucks — and when it came, I spent a couple of hours popping in disks from those shoeboxes, and I found that… I really didn’t need any of that stuff after all.

So I guess the industry knew what it was doing there.

I’m less sanguine about some of the more recent omissions. (Did I use that right? Should I have said “phlegmatic?” I get those confused.)

You know how I told you I bought a new laptop last month? It’s great and all that, but the freaking thing only has two USB ports! When I bought it, I decided that was OK. After all, my last laptop before that one only had three, which had worried me so much when I first got it that I ordered a USB hub that converts one USB orifice into four. And for awhile, I made heavy use of it, plugging in all sorts of peripherals.

But I had noticed that I hadn’t taken the hub out of my laptop bag in maybe a year, so maybe two would be enough. Maybe. Even though, if you’re me, that means you only have one. That’s because the other one is in use all the time for my mouse. I’m physically incapable of using a touchpad. The first thing I do when I sit down at a computer that has one is disable it, because I can’t keep the heels of my hands from touching it as I type, and making all sorts of insane things happen to the document I’m trying to write — including occasionally defining the whole document and deleting it (and I’m not even sure how I’m doing that, but it happens).

So, I have one free USB port.

And that would be fine if certain other features weren’t missing.

First, I got the computer home and had been using it for a couple of hours — installing software and the like — when something dawned on me: It didn’t have a DVD drive!

OK, that’s cool. I hadn’t used one of those in a year or two, either, so… no biggie.

But then, one of the first days I used the new machine at the office, I kept losing the wifi signal. One of my ADCO colleagues suggested that I plug in the Ethernet cable, which we still have in our offices.

Good idea! Except… there was no receptacle for an Ethernet cable! I kept turning the thing over, this way and that, and no — no hole that shape. Although there’s an HDMI port — why, I don’t know. (I mean, I already have a high-def monitor — it’s attached and everything. It even has a touch screen.) And while hunting, I also noticed there was no SD card slot for the card that goes to the old digital Canon I sometimes still use at work.

I was pretty practiced at rationalizing away these problems at this point. I told myself I took better pictures with my iPhone, anyway — and I do. But in part of my brain, I’m going, I paid full price for this machine! Why doesn’t it have basic, relatively cheap, low-tech stuff that every other computer I’ve bought over the past decade had?

This nagged at me, and eventually I went back to Best Buy to see if I could take this machine back and trade it for one that still had some of these homely amenities. But the other models at the store were similarly bereft. I kept picking laptops up and turning them this way and that, and while a few of them did have SD slots, they weren’t overly endowed with USB ports, and none of them had Ethernet cable apertures.

So I kept the one I had bought.

A few days later, I needed to scan something from my home printer. I have this awesome Canon printer that does everything, and even has a multipage feeder on top, which is wonderful because I scan multipage documents pretty frequently. I love it. I’ve had it for four years, and just a couple of weeks ago replaced the toner cartridge for the first time!

But I couldn’t seem to get the drivers for it to load on the new laptop. Since I bought the super-duper Geek Squad coverage, I got them on it. One of those poor geeks spent a couple of hours trying to get me set up, but he finally installed a different scanner driver, telling me it was newer and better.

It isn’t. It’s OK for PDFs, but the scan quality on photos is really poor. And I’m really, really into good photo quality. This app was made for amateurs, for the kind of people who decades ago used Instamatics — and were satisfied — when I was starting to process my own 35mm film.

But wait! In the file cabinet in my home office, I found the original software DVD that goes with my printer!

Now, if only I had a DVD drive on this computer….

Fine. I’ll order an external one from Amazon. And eventually, I’ll probably get an SC reader and an Ethernet adapter for days when the Wi-Fi is acting up. Which, if I also add a thumb drive, will totally fill up my USB hub.

But it doesn’t seem like I should have to do all this. Computers should come with more holes in them. Is that really too much to ask?

6 thoughts on “Oh, drat these computers! They don’t have enough holes!”