My two signs, well spaced, to promote the bandwagon effect.

Girding for the primary that is finally about to occur, I went to Biden HQ and picked me up a couple of yard signs, and put them up over the weekend.

And in my Republican neighborhood, I felt very smug and secure in my belief that my message would dominate, because I had not yet seen a single other sign for a primary candidate in the whole subdivision. And we walk about the neighborhood a lot (still maintaining an average of more than 11,000 steps a day).

But then on Sunday, on a whim, I decided to take a different course — I proposed we cut through this little park we have that’s way down at the base of the dam for one of the neighborhood’s two lakes, then climb up the other side of the park to a street we haven’t walked on in years, on the opposite side of the other lake from where we normally walk. 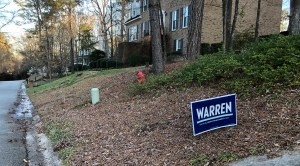 And there, I saw it. An enemy sign. So now, the battle has been joined. I’m using these war metaphors, of course, because this was an Elizabeth Warren sign, and you know how she’s all about fighting. Fight, fight, fight…

But fear not! We’re still in the lead, because I’ve got two signs. I live on a huge lot on a corner, so I put one of them along the main drag in front of the house, and the other facing the side street. They’re far enough apart that even if you’re at an angle where you can see both (above), it’s kind of like they’re in two separate yards next to each other. (Were this Shandon, they’d seem to be at least two yards apart.)

This promotes the bandwagon effect: Dang, it looks like everybody around here’s for Joe! I’d better get on board! Sneaky, huh?

Of course, truth be told, you can’t tell all that much from signs in this neighborhood. Before the 2016 GOP primary, there was one Trump sign in the neighborhood. It was several blocks away, and every time I saw it, I thought something like, I guess there’s one in every neighborhood. (Kind of like what my Republican neighbors are thinking about me about now.)

But Trump won my precinct, so…

Anyway, I can’t control all that. I can just do my bit for Joe, and let the chips fall… 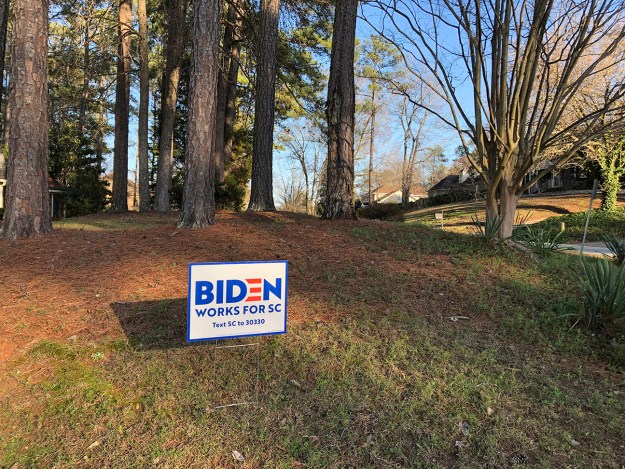 6 thoughts on “The Great Yard Sign War (or at least, a skirmish) begins”