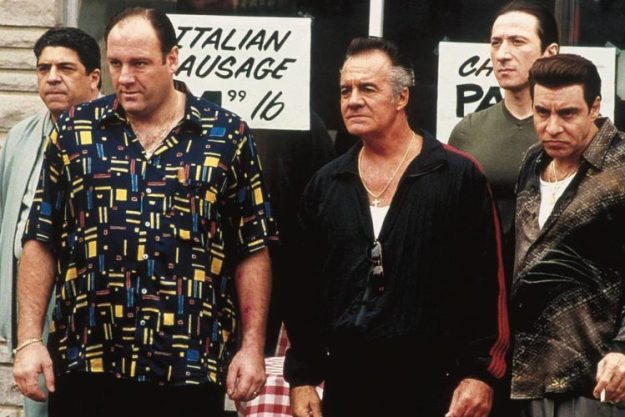 From “The Sopranos” through “Game of Thrones,” HBO has been keeping us up on Sunday nights for almost a generation. And the guys and I are getting tired of it…

First, this seems like a stupid thing even to be thinking about at this stage in the 21st century. It’s been decades since the scheduled time of a TV show was a thing that regularly concerned me.

When I was a kid, when something came on was a huge factor in how I planned my life. Back in about 1965 and 1966, I didn’t even need a TV Guide — I knew when everything came on on the three channels we got in New Orleans. I had the schedules memorized. I was TV mad, after having spent two-and-a-half years living in South America without television — we left our set in our bodega, not even plugged in. Those first couple of years back in the States, I was mainlining it all — comedies, dramas, variety shows, talk shows (Merv Griffin, anyone?), reruns, even occasionally soap operas. I even loved the commercials. As I’ve mentioned here before, the night of September 15, 1965, was a major landmark in my life as an 11-year-old, because on that night, “Lost in Space,” “Green Acres” and “I Spy” all premiered.

But then I got older, and got a life. But I still looked forward to some shows, such as “Hill Street Blues” in the ’80s. But about that time, we got a VCR. And every development since then — DVDs, streaming, has made me increasingly apathetic about when something comes on.

There are exceptions to this. For instance:

And I have to wonder: Why does every time-sensitive thing I want to see schedule its first broadcast at a time that keeps me up on the night before Monday morning? It really kind of makes me feel like TV schedulers hate me.

But I’m one of the lucky ones, as I was reminded this past week by a piece in The Washington Post headlined “Move the Super Bowl to Saturday, already. And the Oscars. And most of HBO.”

Well, I couldn’t care less about when the Super Bowl is on. (But don’t get me started on baseball games that keep me up half the night for the convenience of the West Coast. If those people want to watch baseball, they should move back to civilization.)

And I care even less about the Oscars and other celebrity strokefests.

But yeah, you’ve got a point with HBO.

And it’s not just Sundays. Alyssa Rosenberg notes that we’re in for a bruising week this week:

2020 offers a particularly punishing schedule for American television watchers. The Super Bowl kicks off at 6:30 on Sunday, Feb. 2, and a week later, the Oscars begin at 8 in the evening on Sunday, Feb. 9. That means two late nights and two underslept Monday mornings for Super Bowl and Oscar viewers — and in between them, the Iowa caucuses on Feb. 3, President Trump’s State of the Union address on Feb. 4 and a Democratic primary debate on Feb. 7…

But the main problem is Sundays. And I’m tired of it. You?

3 thoughts on “Why is everything worth watching initially aired on Sunday nights?”