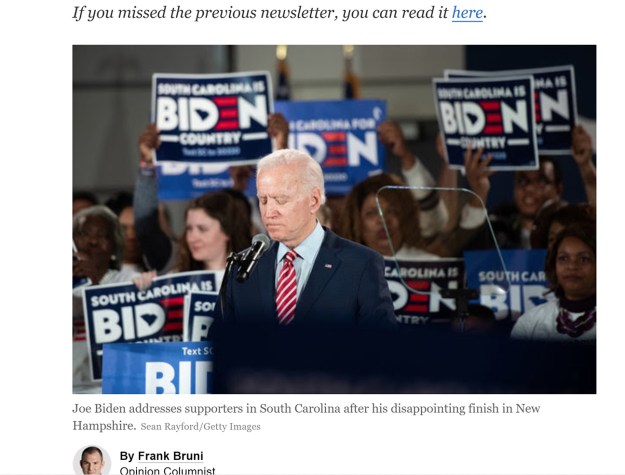 This blew me away.

Being a fair-minded guy, I wanted to stress that not everyone in the working media lacks perspective. You know that one headline from this morning that I cited and dissected in my previous post? I was going to confess it was a bit of an outlier, and that for every guy like that one, there’s a sensible soul such as Frank Bruni, whose column this morning made the same point I did:

Yes, Bernie Sanders won the state’s primary on Tuesday night. And that victory, coming on the heels of his functional tie with Pete Buttigieg in the dysfunctional Iowa caucuses last week, makes him the indisputable front-runner for the Democratic nomination.

But look at how closely behind him Buttigieg finished, despite furious attacks from Sanders and other rivals over recent days. Look at the sudden surge of Amy Klobuchar, whose strong third-place finish demonstrates not only how unsettled the contest is but also how many Democrats crave a moderate — or female — alternative to Sanders.

Note that while Sanders is hugely well known in New Hampshire and beat Hillary Clinton by 22 points in its Democratic primary in 2016, he squeaked by Buttigieg this time around, as many people who voted for him four years ago obviously didn’t do so on Tuesday night.

And so forth. The real story being the inability of moderates thus far to settle on ONE candidate.

But before adding that, I decided to check my email, and saw an enewsletter from that same, sensible Frank Bruni, and the headline was “What in God’s name happened to Joe Biden?”

OK, fine. Yes, it would have been better had Joe been on the top of the stack of moderates rather than the bottom in New Hampshire, but still — I’m still in a good mood from Joe’s rally at 701 Whaley last night.

And then I saw the picture that ran with the eblast, and my jaw dropped.

I was there. I saw Joe and how he conducted himself. He was as upbeat and ebullient as ever. In fact, if I can ever get the freaking thing to upload to YouTube, I’ll show you every second that he was at the podium, and challenge you to find the split-second reflected in that photo above, in which he seems to be delivering a concession speech with a crushed spirit.

Until I can get that up and running (and finally, here it is), here are some representative images:

Tonight, @JoeBiden did a great job in front of of a fired-up, enthusiastic crowd. This race starts NOW… pic.twitter.com/Fpi7bHl7IE

You can almost always get a picture like that NYT one. You can play a fun game if you use the “burst” function on your phone (akin to the motordrive of old film cameras), and you’ll see all sorts of expressions flash across a person’s face, some of them quite comical and many of them highly misleading as to the person’s emotional state at the time.

But this one is a prize-winner. And I’m shocked that it was used by the NYT, even in an email… 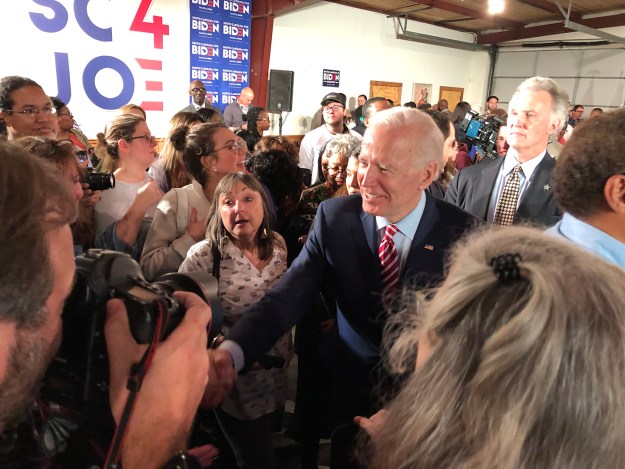 THIS is a representative image illustrating Joe’s mood at the event.

5 thoughts on “Wow, what a gross misrepresentation of reality!”