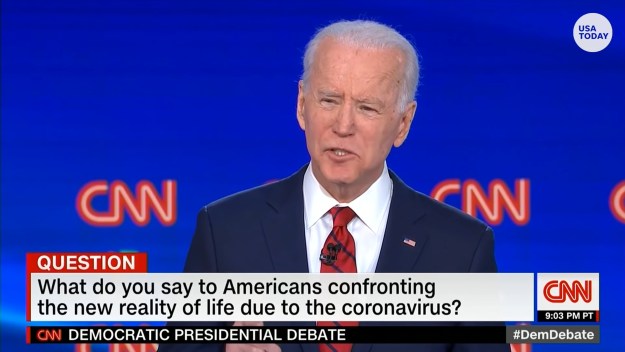 For a number of reasons, this would be a perfect time to declare a hiatus from campaigning, just as we’re putting off all sorts of aspects of our regular lives.

This would begin with Bernie Sanders dropping out. Then, it won’t even be necessary to hold the remaining primaries (which of course have no constitutional role in the selection of a president). The election can pick back up with Joe Biden being nominated at the convention.

We need to pause, and concentrate on staying alive between now and the summer.

Here are some of the reasons:

Last night’s debate illustrated the point that we’re just going through the motions now. The various things Bernie Sanders brings to the non-contest look increasingly irrelevant in light of what the nation is facing now. Here’s how Frank Bruni described the debate:

…Biden was able to portray Sanders’s grander plans for transforming the American economy as luxuries unaffordable in the face of a scourge, as distractions from the emergency upon us. “People are looking for results, not a revolution,” Biden said….

This is an illustration of why I don’t believe in campaign promises. You’ve all heard the saying, “If you want to hear God laugh, tell Him your plans.” Bernie is all about his plans, as Elizabeth Warren was. But the job of president is about dealing with things that arise once you’re in office, things you can’t anticipate during the election. That’s why I always choose based on the candidate’s character and experience, not “read my lips” promises.

I think the coronavirus has made a lot of other people think more about this. Citing that same Bruni column, he also said of Sanders:

And he couldn’t claim the kind of experience that Biden repeatedly did, the intimate knowledge of what it’s like to be at the center of crucial national decisions.

Biden smartly understood that his eight years beside the last Democratic president and his foreign-policy seasoning are probably more reassuring to voters now than they were a month or even a week ago. So he marinated in them….

Odd metaphor (marinated?), but yes. That’s what I’m on about. Biden has the relevant experience.

Bernie thinks always in terms of his worldview and his plans. Talk about coronavirus, and he keeps trying to change the subject to his allegations that the system is fixed and billionayuhs are exploiting us all. Which really doesn’t help us deal with the pandemic upon us.

Nevertheless, COVID-19 could skew upcoming primaries in Bernie’s favor, contrary to the actual will of the electorate.

How’s that? Well, as we know, Bernie’s army of young voters have thus far failed to appear, which is why he’s getting pounded by Biden. But think about this: Who is more likely to show up at polling places during the coronavirus crisis? Younger voters, for two reasons:

While the numbers of young people coming out to vote still won’t match Bernie’s grandiose visions, a large enough percentage of older voters may stay home and hand Bernie a victory — even though most of the usual electorate, sitting at home, prefers Biden.

Doubt it? Think about the confusion of the last few days. I don’t know you, but I keep swinging back and forth in my mind about whether this or that activity is still OK to engage in. Of course, if it were just me, I’d turn out, because I’m that much of an obsessive about having my say. But not everyone is.

I suspect if Bernie won any of the new few primaries, the narrative would change. It could reverse, at least to some extent, the perception of Biden’s inevitability. I still don’t think Bernie could win, but he could drag the process out in a way that is destructive to the cause of beating Trump in the fall.

And of course, that’s what’s important.

I can hear some of you snorting, “Brad’s trying to rig things for his guy!” But what I’m actually doing is worrying that the coronavirus could rig the process for Bernie, contrary to the will of the great majority of Democratic voters — the majority that has turned out in such force in the last few contests before the nation started shutting down over the pandemic.

One day — tomorrow — could be enormously destructive to the cause of beating Trump, if the factors I’ve just described come into play in Illinois, Florida, Ohio and Arizona.

Maybe I’m wrong to worry. Maybe Biden will roll to easy victory in those contests tomorrow, and then it will become obvious even to Sanders that he should drop out. (And I think this is what most observers expect to happen. So would I, were I not a born worrier.) And maybe he even will, at that point..

But I confess that at this point, I’m a little concerned about what could happen tomorrow. And how it could fail to reflect the will of Democratic voters as a body, and continue to tear at party unity in a way that benefits Trump… 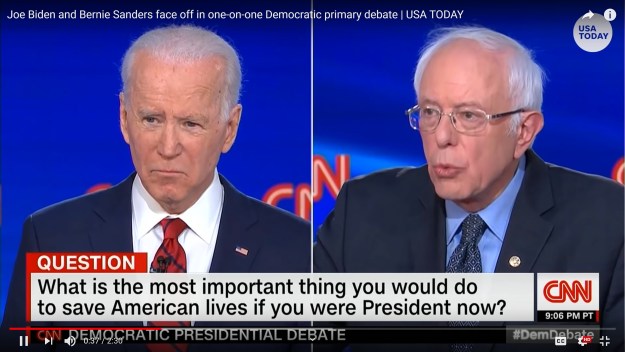 3 thoughts on “Could COVID-19 give an advantage back to Bernie, contrary to most Democrats’ wishes?”