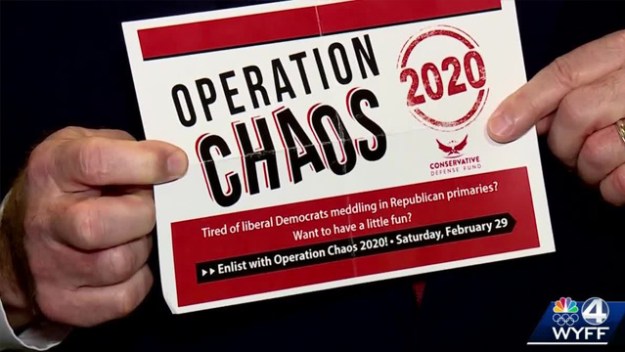 Yes, I think it did. It just wasn’t enough to stop Joe Biden’s huge victory.

Of course, I can’t be sure.

There are some indications that Operation Chaos DID turn out a few Republicans who tried to sabotage the Democrats by voting for Bernie Sanders.

(At this point, I would normally launch into an indignant sermon about how evil such an effort is — a deliberate attempt to undermine our democracy, and even worse, an attempt to make sure Americans have NO good choice in November. That’s something I can get pretty worked up about. But it failed pretty spectacularly, so never mind. Turns out most people aren’t jerks.)

Take a look at the results for our two neighboring counties:

Bernie did even better in Greenville, while still getting pummeled — 24.7 percent to Joe’s 38.2.

Makes you wonder how big Joe’s victory margin would have been without Republican interference… Or, for that matter, without Steyer spending $23 million on media alone in our state trying to steal Joe’s black support.

I would love to think that some Republicans turned out because they were Never Trumpers, trying to help the Democrats come up with someone who might beat Trump by voting for Joe. I think that’s possible. But there’s no way to be sure of that, either.

By the way, I’m very proud to point out that in my home county, Marlboro, Joe got 61.3 percent of the vote, and Bernie didn’t even come in second! Steyer did, with 20.2 percent. Which is an indicator that Steyer did make slight inroads into Joe’s African-American base. (Marlboro is a black-majority county.)

But it’s not that simple, either. Joe did even better in neighboring Chesterfield County, with 64.1 percent. But less than a third of that county is black. Which could explain why Sanders beat Steyer there.

Fun with numbers. (Mine came from The New York Times.)

5 thoughts on “Did ‘Operation Chaos’ actually deploy on Saturday?”