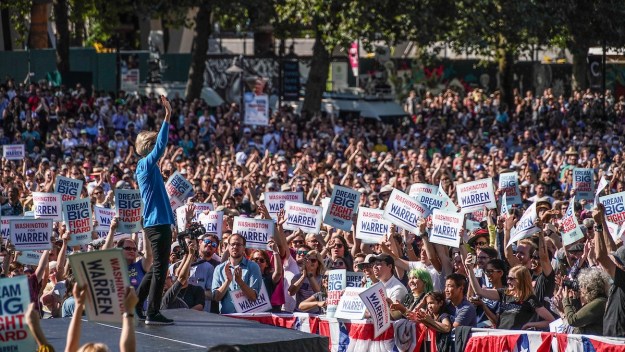 Warren before quitting, in an image from her Twitter feed.

So Elizabeth Warren has dropped out.

But she has not endorsed anyone.

Not today. I need some space around this and want to take a little time to think a little more.

REALLY? You have to think about whether you want to back Joe Biden… or a guy who would lead to four more years of Trump, loss of the House, and zero chance of dumping the Senate majority that refused even to consider evidence in the impeachment “trial”?

What is this about? Angling for an offer from one camp or the other?

Speaking of which: There are people out there saying Warren should be Joe’s running mate. The old “balance the ticket” nonsense.

In case you haven’t noticed, Democrats are rejecting the left wing of the party. Pick a representative of that faction, and you’ll lose large chunks of the coalition that’s assembled behind you these last few days, the coalition that will take you to victory over Trump. They’ll want someone else like you, and that’s Amy Klobuchar. Or some other moderate who didn’t run.

For that matter, the fact that she had to think about whom to support should disqualify her as a running mate, without considering anything else. Amy Klobuchar didn’t have to ponder it.

66 thoughts on “Elizabeth Warren has to THINK about it? Really?”