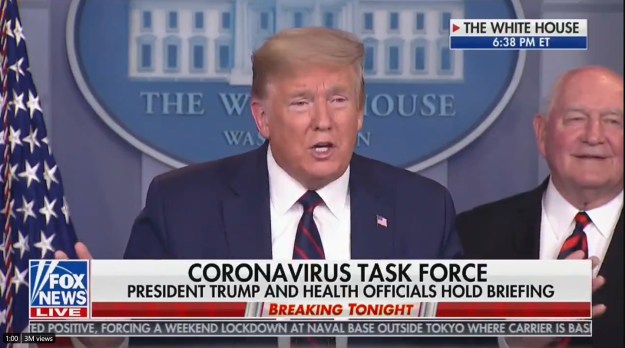 Look at me! I have the most popular show on TV! Isn’t this great? I’m a hit!

My wife showed me this last night, and I assumed it was a joke. It looked like a real Tweet, but I figured it was from The Onion or something like that, spoofing Trump’s obsession with his own popularity.

I thought it was carrying things a bit far, suggesting even as a joke that he would brag about his TV ratings when he’s giving national briefings about something that could kill 200,000 Americans.

But then I looked. And there it was, in his Twitter feed:

“President Trump is a ratings hit. Since reviving the daily White House briefing Mr. Trump and his coronavirus updates have attracted an average audience of 8.5 million on cable news, roughly the viewership of the season finale of ‘The Bachelor.’ Numbers are continuing to rise…

Even after I saw that, I figured something was missing that would explain it. I started looking around for news stories about it, and didn’t find any right away — although there was a lot of buzz about it on social.

This morning, I found some coverage, buried way down below other stuff. But basically, they treated it as routine.

This is how far we’ve fallen in normalizing his behavior. The president of the United States puts out something you would only expect from a profoundly maladjusted child, bragging about how everyone’s watching him while thousands of people are dying around him. In the world we knew before 2016, his aides would be trying to gently maneuver him into a padded room, and preparing to invoke the 25th Amendment…

22 thoughts on “I couldn’t believe even Trump did this”