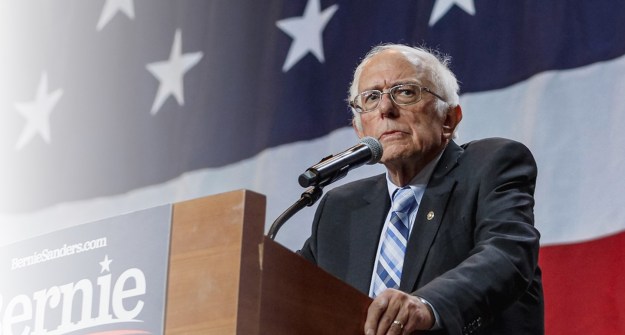 Somebody needs to tell the guy…

Since reading this morning that Bernie Sanders, in the wake of Joe Biden (again) sweeping the primaries yesterday, would be “talking to supporters to ‘assess his campaign,'” I’ve been thinking of the Mitchell and Webb sketch titled “The New Fuhrer.”

No, I’m not comparing anyone, much less a Jewish Democratic candidate, to Nazis.

But there is something relevant to what I think needs to happen now.

The sketch paints a comical imagining of what it was like when Admiral Karl Dönitz was named, very briefly, head of the German state after Hitler’s suicide. In this version, Dönitz misunderstands the situation and is initially excited about his big promotion.

But one of the officers who brought him the news brings him down to Earth very firmly. Placing a piece of paper on the admiral’s desk, he says:

We’ve taken the liberty of drawing up a list of priorities.

Here’s the English for, “We give up.”

And here’s an analysis of our military situation in one, rude word.”

Someone needs to get that blunt with Bernie. This nation has too much going on to waste time and energy pretending that anyone other than Joe Biden is going to get the Democratic nomination.

As Jennifer Rubin wrote last night while the results from Illinois, Florida and Arizona were still coming in, the time is past for Sanders to maintain “the pretense that the race is still active.” There’s work to be done to make sure we can even have a general election in the fall:

The Biden team certainly would like to begin staffing up for the general election and planning for the distinct possibility that there will be no in-person convention. The latter would necessitate a Democratic National Committee rule change. The logistics of such an effort would be daunting. (Would state delegates be able to meet in their home states, or will nearly 4,000 delegates “attend” from the safety of their own homes? What access will be afforded to the media?)

Moreover, the DNC should be making a full-court press now to arrange for no-excuse voting by mail in all 50 states for November (and for primary races for House, Senate and state races). Failure to do so would mean thousands or even millions of people might be effectively disenfranchised depending on the status of the pandemic and the condition of those who might have contracted the virus (as well as their family members who are caring for them). Foot-dragging by the Republicans — whose mission in recent years has been to make voting harder (thereby suppressing the votes of those they think are likely to vote for Democrats) — must cease. Their own voters will be just as likely to be affected, so it would make little sense for them to oppose one uniform system of mail-in ballots….

And so forth. Even with Biden as the acknowledged nominee, there’s a lot to be sorted out.