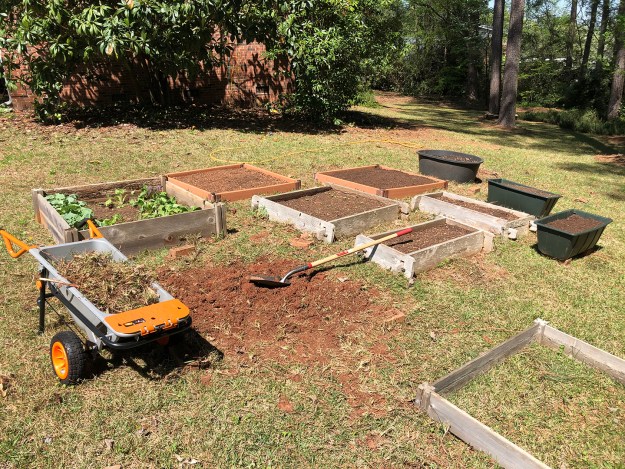 That tiny square of ground under the shovel is what inspired these musings.

My wife is the gardener. Always has been. She’s had an organic garden going since the first time we were in a house rather than an apartment. At our current location, which is cursed with hard clay, she grows vegetables in small, raised beds.

Consequently, she just goes out to pick our food daily. Depending on what’s in season — and almost any time of the year, there are various greens going that she can go trim from and make a salad.

So this year, as I have done in previous years but not followed up on it, I voiced a wish to grow something myself: okra. With me, it’s always okra.

I’ve grown other things in the past during my own brief forays into agriculture. But whenever I think, what vegetable do I want more of?, it’s pretty much always okra. Also, it’s not that hard to grow, and you don’t have insane stuff happening like smut growing on your corn.

Anyway, this year my wife took me up on my idle assertion, and — using the authority vested in her as agriculture commissioner of our household — granted me the use of one of her boxes. But I’d have to dig a new bed for it. That is, before purchasing and filling the box with bagged soil from the store (the only place to get serious dirt when you live on “land” like ours), I would have to use one of our mattocks to bust up a section of lawn.

I, of course, being a thoroughly modern fellow, suggested borrowing our older son’s tiller that he bought last year (he’s a pretty serious gardener himself, blessed with sandy soil — recently, he even started keeping chickens). My wife said all the rocks in our clay would probably break his tiller, and I agreed that she probably had a point.

And I kept thinking… well, you member recently I told you about reading Guns, Germs and Steel? It deals at great length with what caused different human populations to develop differently, and why when the nations of Europe started spreading around the world in the 16th century, they ran into a lot of cultures that were still hunter-gatherers. The book did a lot of explanation — and speculation — about how and why those cultures developed the way they did when they did.

One of the main themes of author Jared Diamond is refuting the racist assumptions that had such currency in the 19th century about why European cultures “advanced” so far beyond those of more “primitive” people. Basically, he demonstrates that it was mostly a matter of luck of the draw — having the right, domesticable plant and animal species in a given area being one of the greatest determinants. Because everything that came later — writing, technology, complex political structures, etc. — depended on how early and how successfully you adopted agriculture.

I was convinced of the rightness of his propositions, with a caveat: I suspect there are some people who just didn’t want to give up hunter-gathering.

And as my mattock rose and fell, and as I fought off dizziness every time I straightened up for a moment while tilling the soil in a manner not far removed from the techniques of the Stone Age, I kept thinking that were I a member of a pre-agricultural band or tribe or whatever, I would be that guy.

I’d be the guy saying, Yes, you make excellent points about the advantages of settling down and growing our own food and forming more complex social arrangements and initiating a technological process that will ultimately lead to HD televisions. And I particularly like the point made by Ogg over here that if we start growing crops, we can then make beer. A good supply of beer would be nice to have while watching our HD televisions. Especially if we have developed the refrigerator. It’s an appealing vision of the future, I’ll admit.

And as you know — I mention it often enough — I’m a communitarian kind of guy. I like the idea that we would have to work together to build such infrastructure as elaborate irrigation systems for our crops — and that to do that, we’d have to have structures for cooperating such as governments. That’s very much in my wheelhouse.

But think about it: Don’t we have cooperation now, in a truly meaningful way? I mean, come on, guys — we all know that no one of us can bring down a mastodon alone! We have to work together — Ogg in front of the mastodon distracting him, Thrag and his brothers on the flanks to drive their spears into its sides, and me standing on a nearby hill offering helpful suggestions. You know, as Karl over here keeps saying, “from each according to his ability”…

And what about when those yahoos from across the valley attack our camp, trying to take some of our women so they can diversity their feeble, stagnant gene pool? We need all the spears and clubs that can come running. That’s way communal.

But if we settle down and start farming, next thing you know we’ll have villages, then towns, then cities. And we’ll have ever more elaborate institutions to direct and organize our affairs. And you know what that means:

None of us wants that. So let’s put down these stone implements before we get a blister, and go out on a hunt, how about it? Who’s with me? (I go running off like Bluto in “Animal House”…)

Anyway, that’s what I was thinking while I was digging out that raised bed. And it was only about four or five feet square. Imagine if it had been an acre. It would have inspired me to write War and Peace, if I survived it…

9 thoughts on “‘That’s it! I vote we continue to be hunter-gatherers…’”