On October 17, 2018, the day of the first of two gubernatorial debates, the campaign booked a suite at the Hotel Florence — which is a pretty neat place, in case you’ve never checked it out. (And I’m not just saying that because of, as a Pee Dee boy, having a tendency to see Florence as the “big city.” It actually is a pretty cool hotel.)

The suite had a terrace, from which you could see the civic center where the debate would be. James sat out there for awhile alone, studying a bit for the debate, and we talked a bit of strategy around the suite’s dining-room table. But mostly we sat about killing time — James was not a great one for debate prep. He just got his head into the place where it needed to be, and went out and mopped the floor with Henry. Not that it did us any good on Election Day.

I’ve got some photos from that afternoon. There’s Scott Hogan, the campaign manager, on the couch staring at his phone. There’s Phil Chambers on his laptop at the table. There’s Mandy Powers Norrell ironing her dress for that night.

But the person most absorbed in a task was the candidate’s wife, Kirkland Thomas Smith. She was busy making a dress out of beer can pull tabs. She said she was making it for the inaugural ball — then asked whether we thought that was a bad idea. I guessed she meant, was she jinxing the campaign? I don’t think so. I think we can chalk up the loss to other causes — such as most white South Carolinians being physically incapable of pulling the lever for a Democrat.

Anyway, Kirkland is always doing something cool like that, something surprisingly creative. Things like this four-foot-square portrait of James that hung in the foyer of our campaign HQ. That’s what she does. I felt privileged to get to know her better during the campaign.

And I thought I’d share the “Artist Minute” that Alan Cooper put on his site, MidlandsBiz, which shows Kirkland talking about her amazing artwork that she creates from junk. I can’t even begin to see how she takes debris and turns it into a recognizable portrait.

I can’t wait to see what she creates next… 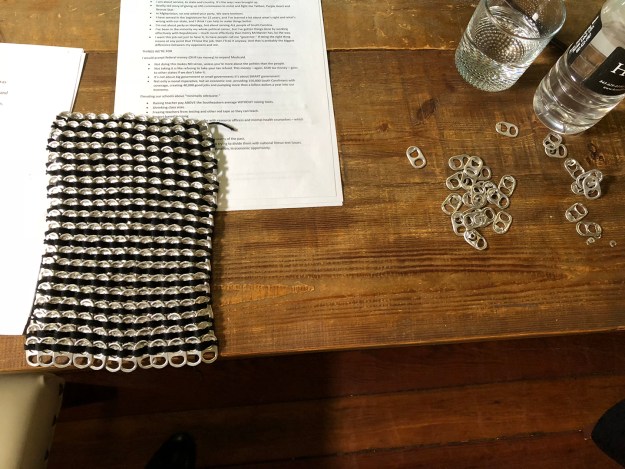 A completed part of the dress Kirkland was working on, sitting on the table in the hotel suite. Under it you see a memo of talking points I had put together for the debate. Not that James needed it. He knew what his talking points were. But I felt like, as communications director, I should do something to prepare.