With Pete Buttigieg dropping out, one my favorite NYT features now looks like this: 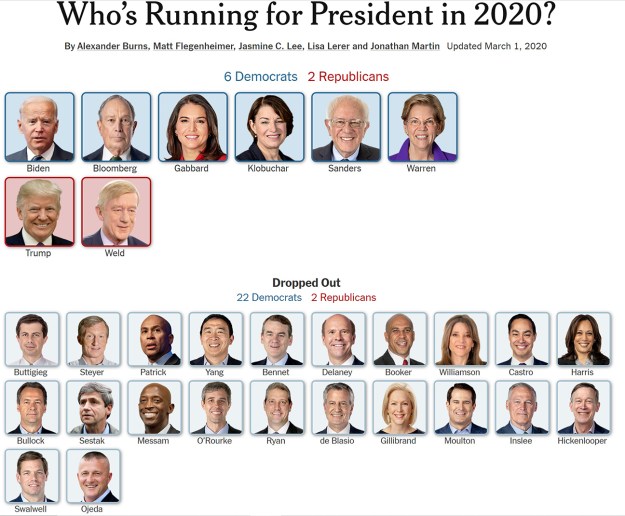 So, Pete’s out, but sooner than I expected it.

This seems precipitous. Why didn’t he wait until after Tuesday?

Still, as Michael Corleone said about Tessio, Pete was always the smart one. He gets out now, making room for the eventual nominee, and the party will be grateful to him, which helps when he runs again.

He’s got all the time in the world. If he waits 20 years, he’d still be a young candidate — prime presidential age. For that matter, he could wait 40 years, and he’d still be no older than some of the top contenders today. And life expectancy will be so much longer then.

It’s such a smart move, so lacking in emotion or ego, that it makes Pete a little scary — kind of like Michael Corleone himself. Such perspective and self-control is remarkable in the young.

You know, Pete is the first candidate who I think I’m actually going to miss. Most of the rest, I was glad to see go. He was my third favorite — a distant third, just as Amy Klobuchar was a distant second. But still, one of my top three.

Speaking of Amy… ahem. Pete was doing better than you were. You got 3 percent in South Carolina. When my man Joe Lieberman got 3 percent in South Carolina, he dropped out. Better get while the getting’s good, if you want to be Joe’s running mate. He’ll be grateful, because with Pete also out, his only rival for the role of The Man Who Stopped Liberty Valance (I mean, Bernie) will be Bloomberg.

4 thoughts on “Why’s Pete dropping out now? Because he was always the smart one”