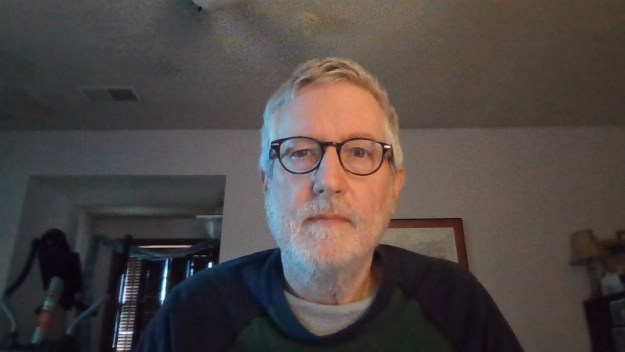 Hey, look! The camera on my laptop works. Never tried it before.

Something’s wrong. I’ve got something. I don’t know what it is.

Could it be the coronavirus? Maybe. I don’t know. Probably nothing. I’ll laugh about this tomorrow.

I woke up just after eight this morning. I realized I had turned off the 7:30 alarm yesterday when we went to Food Lion at 7.

I got up and felt very dizzy. OK, I thought. It’s that thing I’ve had for several weeks. I seem to have developed the other form of Ménière’s syndrome.

Look! My phone knew how to spell that. I don’t feel like I can type. So I’m dictating to my phone. It’s working.

Anyway, I’ve had vertigo when I first stand up when I wake up. After a moment, it goes away. Feels worse today, though.

I got up. I was way too dizzy to walk around. Decided to take a hot bath sitting down, instead of a shower. Next thing I knew, my wife was calling me from far away. I looked, and it was a little after nine. I closed my eyes. She called again.

I forced my eyes open and said OK, and flipped open the water with my foot. I closed my eyes…

I managed to get up. Very dizzy. I dried off, got dressed. I went to the front door, because I saw out the window that my wife was outside.

There was something wrong with my eyes. This had not been the case before I got in the tub. I could not focus on anything lower than eye level. I realized this meant I couldn’t write at the computer. I couldn’t read a book. I couldn’t even watch TV. If I wanted to look at something, I had to hold it up above my eyes.

I wouldn’t be able to work. I had so much to do. After about 20 minutes, my eyes got better. I was so relieved. I went to get a package of coconutmilk yogurt. For a smoothie. When I came back, my eyes were messed up again.

I made the smoothie anyway, feeling my way, my wife standing next to me.

I called Lora from ADCO and told her I could not work today. She was very understanding. I was not. I had so much to do today. But I couldn’t. About this time my eyes got better again. I was able to glance down at my phone.

A few minutes later, my vision was messed up again.

I tried sitting in the TV room in my recliner for a while. It was all right, but I wanted to go back to sleep. I went back to bed a right at noon. Got up to use the bathroom at three.

My eyes were still messed up. Very dizzy. Went back to bed. Fell back to sleep immediately.

At four, my wife called me awake. She was sitting on the bed. Gradually I got up and got dressed.

It’s 4:39 PM as I dictate this. I’m upstairs in front of my computer. My wife told me not to come up here, because I would try to do something with my eyes. But I came in anyway, holding onto the rails with both hands.

Is this coronavirus? I have no idea. My eyes were messed up when I woke up, but right now I can look at this,. Good.

If I can, I’ll keep you posted. Probably nothing. i’ll try to watch the TV now. We’ll see how that goes.

This is probably nothing. Tomorrow, I’ll feel ridiculous. I’ll set it to post later, and stop it if I feel better…