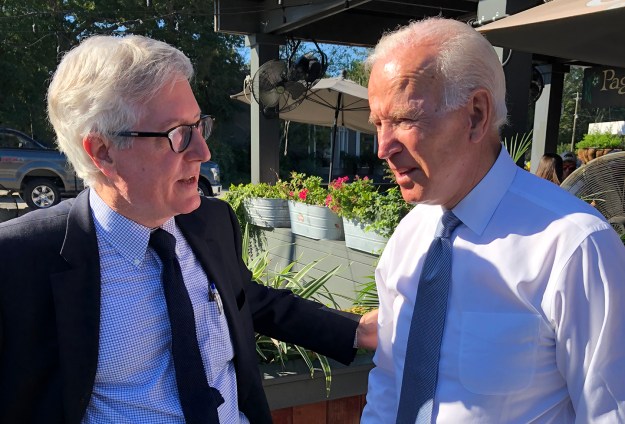 Here’s what I think, Joe: You should take off until at LEAST Labor Day. OK?

This is one of those blog posts I’ve meant to write since not long after South Carolina set all that Democratic nomination nonsense straight at the end of February. Remember how stupid stuff was before that? The world was full of people who imagined there were reasons to suppose someone other than Joe Biden would/should be the Democratic nominee, and they wouldn’t shut up about it for, like, most of a year. It was tiresome.

Well, we fixed that, as soon as we got a chance. Finally, even Bernie Sanders got it. I think I heard recently that even Elizabeth Warren had endorsed Joe. So that’s good, I guess.

But now, there’s other stupid stuff going on, despite the fact that nothing is normal, and we’re all dealing with this coronavirus and stuff. Some of us have even had a freaking stroke, and are really not inclined to put up with stuff like this Tweet today:

The last time Biden held a press conference: April 2. (He has done individual interviews, held fundraisers and town halls, and other virtual appearances since then.) https://t.co/azMVpVSFRq

A bit after sending that, she added … well, you see what she added: “Biden took four questions.”

Really? What is missing from your life that you think Joe Biden should be doing command performances for you on a regular basis?

More stupidness. So I replied with the only relevant question I could think of: “Why did he have a press conference? Dang. Guess I need to write that blog post about how Joe should be on vacation until about, say, Labor Day…”

What is it that you suppose Joe should be saying or doing right the f___ this minute? Huh? Look. Most of us know that deliverance for this country involves, demands, can’t be had without, replacing Donald John Trump with a normal, decent, qualified human being. And as I told you, over and over for months before we in SC got a chance to step in and do something, that there is no one on the planet more normal, decent and qualified than Joe Biden. That’s been the fact since this started.

Either you get that or you don’t. Those who don’t get it yet and need to by Election Day need to get that message THEN, in the context of what’s going on THEN, which is like light years away from NOW, and anything they hear NOW is likely to be long forgotten by then. These are not, in any case, people with long attention spans.

But even if they were, things are going to change, a LOT, between now and then. And however they change, Donald John Trump won’t be any better at being president then than he is now. Which, for people with longer attention spans, is and has always been the point. That point will not change if Joe Biden has a press conference today, or tomorrow, or anytime soon. If it seems to change, I assure you it will change back, long before Election Day.

Folks, think. If you’re capable of it.

Most of us don’t know whether life will have turned around back toward normal — not normal, but toward it — by a month from now. We don’t know. But if it does, it will still only be May. We won’t have a decision yet on whether there will even be a Democratic Convention at that point, much less how the election is going to come out.

There is nothing Joe needs to do, or define, or explain in that time. Nothing. Yeah, he needs to be raising money, but that doesn’t require press conferences.

Then the summer will come. And it will pass, no doubt with a lot of confused weirdness.

Then the fall will come, and the coronavirus will probably come back. We don’t know what that’s going to look like, but it isn’t going to be pretty, and Donald Trump will not have his normal world with a booming stock market breaking records (in a good way, anyway).

He’s going to really start freaking out then. That’s when Joe needs to be drawing the contrast between this and normal. That is what he’s running against, and that’s when he’s running.

Nothing we can do can make Election Day come one day earlier. It sure won’t come earlier by Joe Biden running around acting like this is a normal election year. Although it will at least feel longer that way.

And I don’t want it to feel longer.

There’s a lot more I could say, but this should get a conversation going…

44 thoughts on “Joe Biden should be on vacation until at least, I don’t know, Labor Day or something…”