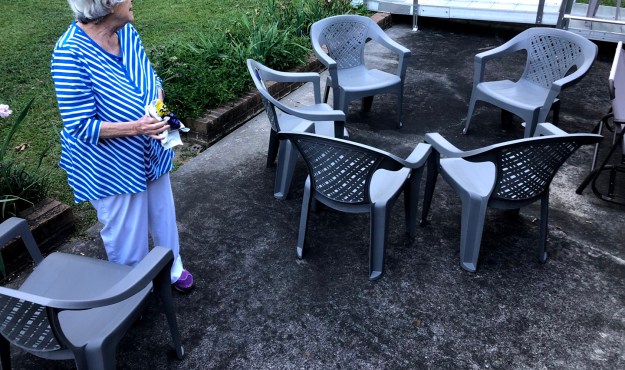 The six we ended up with.

My mom wanted some plastic chairs. My brother and his family were coming through town, and she had discovered from past visits from grandchildren and great-grandchildren that she and my Dad didn’t have enough backyard furniture to accommodate such gatherings.

So I went to Lowe’s to get some. The stackable kind that are easy to deploy and to store. I was to get six. That was as far as my instructions extended.

I first tried late on Wednesday, arriving about 7:30. I found that the store had closed at 7 — quite a bit earlier than the 8:30 I had expected from my last such expedition. Employees on hand told me they’d be staying open until 9 again starting Friday. This prompted two thoughts: 1) Why would they be resuming normal hours then? and 2) What good did that do me?

I returned on Saturday, after having contemplated seeking such chairs at Walmart. But I didn’t. I went to Lowes. This proved to be a mistake. First, I tried to find them on my own, pushing about a large flatbed cart for most of the time. I did this for maybe half an hour before noticing some chairs LIKE what I sought in the area where they put online orders waiting to be picked up. I pointed to them and asked an employee where I might find more. He copied the info from the bar code and we started to look together. About 20 or 30 minutes later, we had hit every area that I had previously visited by myself. We consulted with a number of his fellow employees. With some, we entered into deals where my guy would help them find something if they’d help us find the chairs.

After we had exhausted all these possibilities, we were back where we had started, when I suggested something: Might they be outside, in front of the store? I seemed to remember having seen such chairs in such a position on a previous occasion. I was not alone — the employee stopped, looked and pointed at me in a way that said, “You, sir, are a genius.”

He was right, because I was right. There they were, no more than 100 feet away when we stepped out and looked. Loads of them, in all sorts of colors. The employee had to return to what he’d been doing before, but he left me with advice: I would need to decide which ones I wanted and go in and find someone to get them, because they were all chained together.

I took a lot of pictures, and texted them to my mom — mainly for color guidance. I knew from previous experience that she wouldn’t like the Adirondack-shaped one. I agree. They look great, but are never comfortable. And I counted out the rocking-chair style. That just left a few.

But I was unable to report on how sturdy or steady they were. Because I would have to bring out another employee to help with that, and I wanted to narrow things down first. Also, she was not pleased with the pricing — running between about $20 and $25 for likely models. She had hoped they’d be more like $15.

I said I’d go see what Walmart had, but I warned her not to expect $15 chairs.

I was wiped out at this point. I get that way since my stroke. I felt like I’d been wearing that mask for a year. I called my wife and said I’d be home soon if I didn’t get a LOT luckier at Walmart.

I was home about 15 minutes later.

Things had not started well at Walmart. I parked near the garden center entrance, and found it was locked from the outside. I uttered some choice words — actually just one (no sense getting creative when no one could hear me), but I said it several times. Then I walked around, and made my way back to that department, where I found the following:

There were no carts nearby, but I stopped an employee who had just unloaded a pallet on wheels. He said he didn’t see buggies, but maybe we could use his vehicle. Being careful not to say it with any sarcasm, I said that had been kind of what I was thinking when I stopped him. He wheeled the chairs to the self-serve area, peeled off a barcode and scanned it six times for me. He then wheeled them outside while I went to get my truck. I had meant to shop for some other stuff while there, but didn’t want to mess with the way things were going.

Driving the truck over, I looked in my wallet and found only two dollars. I was embarrassed to offer him so little for being so awesomely helpful, so I just thanked him profusely, and drove the chairs to my parents’ house. They were exactly what my Mom wanted.

I should have given him the two dollars, I decided later…

Why do things go like that sometimes, but too often they don’t? 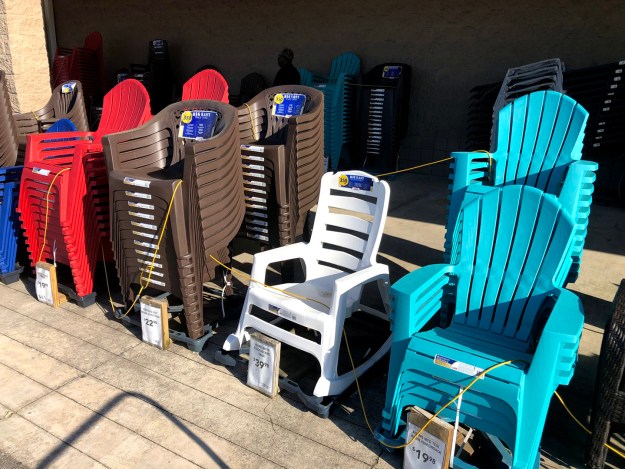 The chairs at Lowe’s.