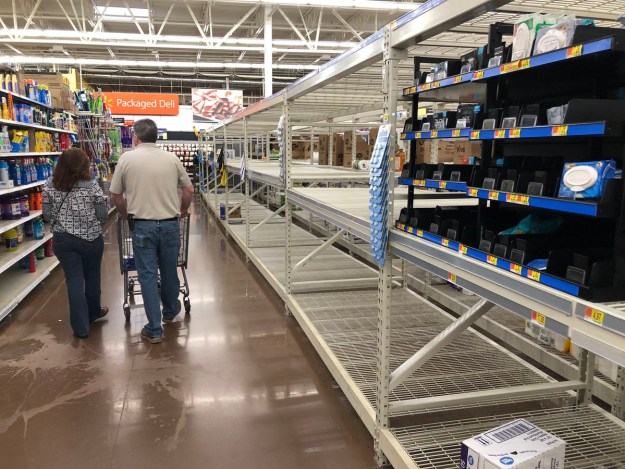 The toilet paper aisle at Walmart in early March. And pretty much every day since.

Right now, there is a lot of debate going on about when we should return to “normal” as a society. This debate takes two forms. One is the usual stupidness that is the particular genius of Donald J. Trump. You know how that goes: If you’re a sensible person, you want to continue the social distancing. If you voted for Donald Trump and would do so again, or want people to think so, you might tend to scream until people let you resume doing stupid things.

There’s another debate going on, but it’s harder to hear because the first one is so loud. In this one, more or less reasonable people try to figure out how to determine when it is safe to go to work, to go shopping, to get a haircut, etc., the way we used to. This debate has a reasonable basis, because we know those things will happen someday. Even the Spanish Flu ended. So how will we know when that day has arrived, or for that matter, when it would be safe to step carefully in that direction?

Well, I’m going to tell you right now that the day has not arrived, and it’s not even close.

I could use all sorts of standards for this. I could say, the day will not be here until we’ve gone several days without a single new case of COVID-19 in South Carolina.

But there’s an easier standard than that, and I think it’s perfect in every way. You don’t have to monitor the entities keeping count of the sick, or pay attention to the frequent briefings involving governors or you-know-who.

If you or someone in your family is making periodic, careful trips to buy groceries — and I think most of us are covered by that, or else we’d starve — you’ll know when it happens.

I’m talking about the day that you go to Food Lion, Walmart, CVS or wherever, and the toilet paper shelves are full. Like, the way they were six months ago full. And they continue to be that way. Then they take down the signs that beg you to take only one package.

All sorts of factors go into this, and a lot of it has to do with something like crowdsourcing. When the A-holes who bought all the toilet paper to begin with stop buying it, and the rest of us stop making a practice of buying ONE package when we see one, it will indicate that everyone is pretty sure we’re safe. It will also indicate that our commercial distribution systems have caught up and are again able to do something that — compared to all the way more complicated things our modern economy does all the time — ought to be pretty simple: keep the supply of a basic, simple commodity that doesn’t rot or otherwise lose value while sitting on a shelf flowing.

Until then, we need to maintain our distance. It doesn’t matter how badly you need a haircut — if we can’t keep toilet paper on the shelves, we’re still too messed up. Use a comb, creatively.

14 thoughts on “Toilet paper: The surest sign that we’re back to ‘normal’”