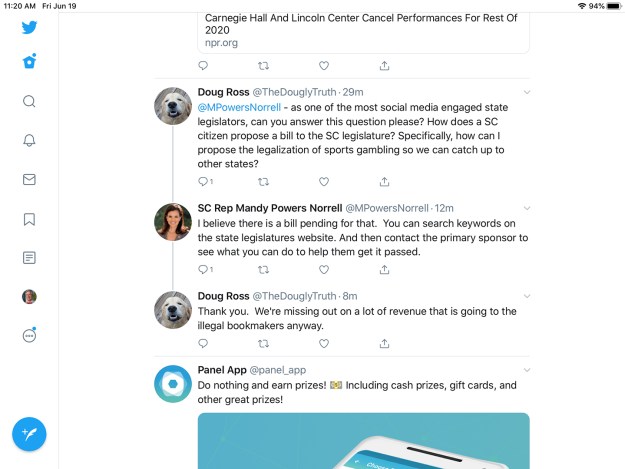 Wonder what Doug Ross is up to during his year without blogging (due to a New Year’s resolution that he has impressed us all by keeping)?

Well, he’s doing pretty much the same stuff, only on Twitter.

I had to smile today at the exchange pictured above in a screenshot.

It’s nice to see two of my friends getting together to work on issues on Twitter.

Of course, as I reported earlier, Doug is also a contributor to Mandy’s re-election campaign. So, good for him there, as well.

As for the issue itself, of course… I’m kinda “meh” on it. Either way, whatever. I sort of get the impression Mandy feels the same way. I can’t remember whether I’ve ever discussed it with her.

I know I’ve discussed it with James, though. In fact, I went and dug up a statement I put together for him about it during the campaign. It’s not something we ran on. But a reporter in Charleston was doing a story about it, and asking various pols for statements. I wasn’t crazy about commenting on things we weren’t running on — I had ambitions of imposing message discipline — but we didn’t turn our noses up at it the way we did stupid “have you stopped beating your wife” questions like “Do you want to abolish ICE?”

Anyway… here’s what I put together on it. I have no way of knowing whether we actually put it out like this. It’s just in a random Word file, not a release or anything. So James might have had me change it before giving it to the reporter:

I’m for regulating it and getting the revenue that the state is missing out on now.

I’m not pro-gambling per se. But this is a matter of common sense, and an example of what I mean when I say it’s not about big government or small government – I’m for smart government.

As everyone knows, people are already betting on sports in South Carolina, big-time. But it’s happening in the shadows, and its an invitation to crime.

We need to regulate it, and keep criminals from controlling and profiting from it.

And the state of South Carolina can certainly use the revenue. I’ve seen figures that estimate Rhode Island could net $25 million from sports betting. If that’s correct, South Carolina would easily see quite a lot more, since we have five times the population. That’s money we could really use, for schools, for infrastructure, for healthcare, for public safety.

So, you know, we were for regulating it if you really wanted an answer. Assuming that was the official statement. I don’t think anyone but that one reporter ever used any of it.

McMaster’s position, by the way, was that he was dead set against it, as his mouthpiece said: “It flies in the face of everything South Carolina stands for.” Highly debatable, of course, but you knew where he stood.

We were much more definitely for medical cannabis, which if if I remember correctly was one of the reasons Doug not only gave to our campaign, but voted for us. Not an issue I would have chosen to back our ticket over, but then I’m not a libertarian like our friend Doug….

5 thoughts on “Good to see my friends connecting on Twitter”