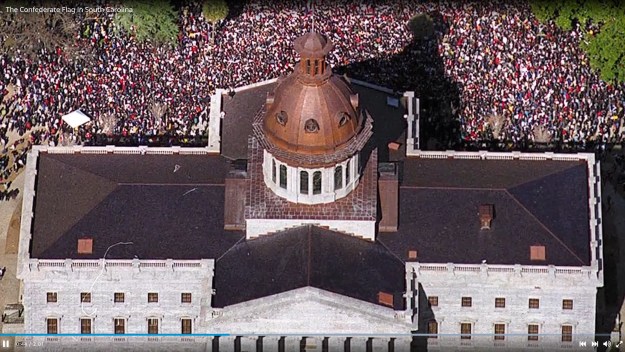 So I tried yet again to read the story in The State headlined “SC Gov. McMaster takes side on Strom, but not on colleges’ push to change building names.” My point was to try again to determine what “side” he had taken on the Strom thing.

I didn’t find out. It’s a fairly long story, and it’s not in the first few inches, so I gave up again. Maybe it’s toward the end. Or maybe the person who wrote the headline didn’t actually read Maayan’s story. I did see where “McMaster’s spokesman gave the first indication of where the governor and former state attorney general stands on the Heritage Act.” But it wasn’t much of an indication. He said if trustee boards ask for changes, Henry “is supportive of them doing so and the General Assembly debating them, with public input, as they have done in the past.” And of course, we know how that has gone in the past. 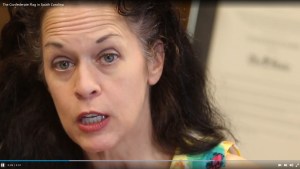 I’m running this small because I know Cindi would hate it. She always hates pictures of herself.

Anyway, that’s not my point. I’m not even much interested in whether that building is named for Strom or not. (I was just somewhat curious as to what Henry had said about it, if anything.) My point is that I was using the maddening browser interface, and as always it urged upon me a video at the top of the story. If you have experience with this sort of thing, you know these videos tend to be two things: 1. Only marginally related to the story, shedding little light on what you came to read about, and 2. Quite old.

But I saw something on that little box at the top of the screen, and for once I didn’t just click on the little X to make it go away, but stopped and watched it.

That something was the face of my longtime friend and colleague Cindi Scoppe. As much as I enjoy seeing Cindi any time, it was weird on three levels:

That last one is probably the weirdest. At least, you don’t have to be me to get it.

But am I suggesting The State take down the old video on that basis? No. Not if they want to have a clip explaining the history of the flag that used to fly at the State House. No one who works there now has that kind of perspective. (There are good people at the paper, but I can’t think of anyone who has that kind of broad perspective on the flag, even though it wasn’t Cindi’s beat back in the day.) I suppose they could get someone else to do it and just say all the same words, but that would be a lot of trouble to go to just to achieve the same thing…