What the president of the United States did Monday was so horrific — having peaceful demonstrators attacked and swept away so that he could walk unimpeded across a park and stand awkwardly waving a Bible around in front of a boarded-up church for no discernible purpose — was so grossly inappropriate, so evocative of what a two-bit foreign autocrat would do in a country that didn’t give a damn about the ideals that animate this country, that, well, it shouldn’t have to be explained.

And yet, I’ve actually seen instances of his defenders, well, defending it. Some of it was pretty stunning.

Basically, this is obviously yet another national Rorschach Test in which you either recoil in horror, or don’t have a clue what is wrong. And the latter portion of our population is the one Trump is trying so clumsily to appeal to.

For those who get it, it doesn’t have to be explained. But I read a lot of stuff eloquently explaining it anyway.

In case you find it helpful, here are some of that, and related stuff:

I don’t know what else to say right now.

I’m just going to share this picture and hope I don’t get in Fair Use trouble. I was told to watch video of all this, but I haven’t yet. For now, the photo is enough: 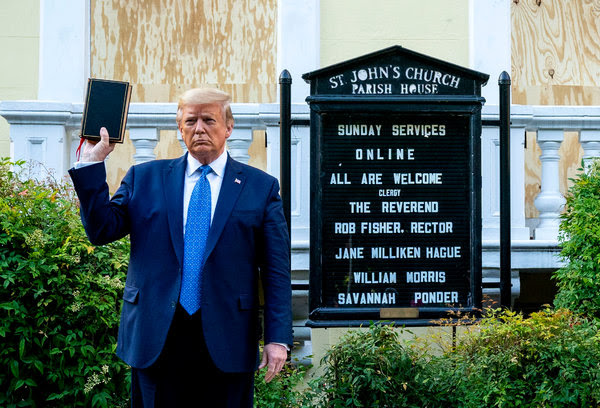