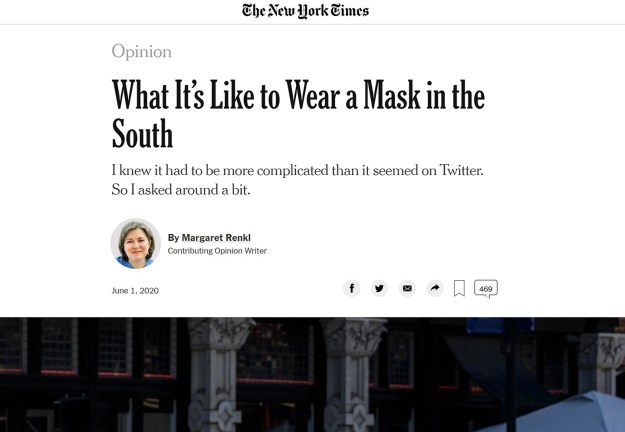 I was reading along through the Opinion section of The New York Times this morning when I found this piece headlined, “What It’s Like to Wear a Mask in the South.” So of course I had to read it. I mean, when the NYT makes the effort to offer something from a Southern perspective, you’ve gotta check it out.

It was written by Margaret Renkl, who “is a contributing opinion writer who covers flora, fauna, politics and culture in the American South.” She’s apparently from Nashville.

I was reading along and thinking, “I wonder if our friend, regular contributor David Carlton, knows her.” Because, you know, writers and college profs sometimes cross paths within the context of a community.

But then, I forgot about that when Ms. Renkl turned her column over to blurbs from other people around the South, and suddenly, there was an old friend from right here in Columbia. It was Allison Askins, who in a previous life was one of our two religion writers at The State. (Yes, there was a time when The State had not one full-time religion writer, but two. We were rather proud of that.)

Allison’s was the very first blurb. Here’s what she wrote:

“I have been making masks for two groups our church is providing them for — an organization that aids the homeless and the Department of Juvenile Justice. I try as I am sewing to be intentional about the act, thinking about who might wear it, hoping they are protected in some way by it and lifting up a prayer for their life, that it might somehow turn for the better in spite of this experience. I find it so sad to think that there are people who maybe are not wearing them simply because they do not know how to get them, can’t afford them or maybe really do not know they need to. It is these among us who I believe most deserve our mercy and our love.”

4 thoughts on “We have really nice people in Columbia, just FYI…”