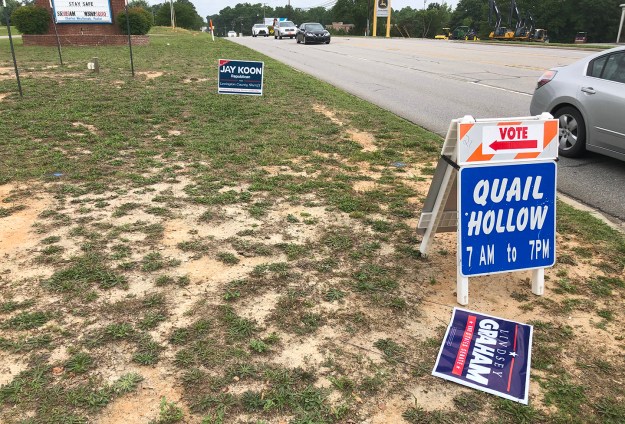 My polling place this morning. And no, I didn’t throw Lindsey’s sign to the ground. But I thought it interesting that someone had.

Well, that was easy enough. No lines, everybody wearing masks, walk right in and out. (I mean, as in and out as is possible when you’re as obsessively careful as I am about voting.)

Did you vote today? If so, how did it go for you?

As for how I voted: Well, y’all know that my priority was voting “NO” to that grossly devious effort by the state Republican Party to shut nonpartisans out of the electoral process. I did so, just as firmly and adamantly as my long cotton swab thingy would let me. It’s a wonder I didn’t break the stick.

By the way, I enjoyed Eva Moore’s take on the swabs:

So now I want to know what you did w/ your swab. 😂 https://t.co/jmgJYCKzAJ

Actually, they had me throw mine away before scanning my completed ballot. Seems to me we missed a big opportunity today. We could have had everyone test themselves for COVID with those after voting.

Anyway, so I voted “no” on that, and on the other, less consequential, “advisory question.” I don’t expect my vote to make the difference. It will probably pass, because of the shamefully deceptive way it is worded. The people who will see that question and fail to understand it far exceed the number I can reach (and persuade) with my blog, and for that matter, that Cindi and the Post and Courier can reach. We can only do so much, when parties stoop to be this sleazy.

Ditto with my votes against Lindsey Graham and Joe Wilson. I went for Joe Reynolds and Michael Bishop — both of whom I believe would do better jobs than the incumbents, if they had a chance. But the real chance — as difficult as that, too, will be — will come in November, when both incumbents have credible Democratic opposition.

I did not vote for either of the guys vying to oppose my senator, Nikki Setzer, nor in the sheriff race. I tried last night, but could not find enough information to be sure which way to go on sheriff. The challenger’s efforts to explain his candidacy were so lame that I had a slight tendency to vote for the incumbent, but I found so little information on him that I couldn’t be confident about it. (He probably has one, but I had trouble even finding a campaign website for Sheriff Koon.)

And I’m not about to ever fall into the “name recognition” fallacy of voting for somebody just because I’ve heard of him. That would be insupportable. I always have reasons — as imperfect as they may be — to vote the way I do.

Anyway, how’d it go for you? I mean, if you voted today. And even if you voted absentee like so many — how did that go?