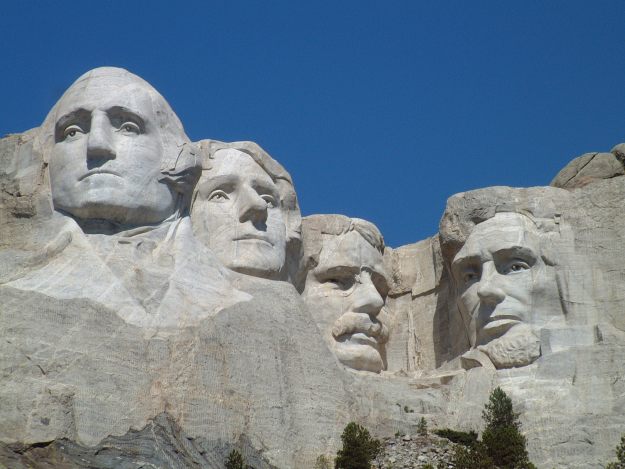 We need to again be a country that can celebrate these guy’s contributions to the American idea, and at the same time be fully outraged at what happened to George Floyd, which grossly violated that idea. In that space where those reactions coexist lies our hope as a nation.

We could celebrate what I have always thought, without question, was the whole idea about America.

It’s not about the majesty of purple mountains or the amber color of grain. And most of all, it’s not about a people — people this color or that color or speaking this or that language.

It’s about the ideas, and their growth toward perfection over time. It’s a majestic story. And it starts not with freedom, not exactly. It starts with liberality. With tolerance, with plurality, with openness to each other, and a fierce sense of fairness toward everyone, particularly those who don’t look or talk or even think the way we do.

And that is in profound trouble in this country.

The most dramatic example of that is embodied by Donald Trump, although he is not the cause of the problem. The problem is that there were enough people who would vote for such a person — a person who deliberately appealed to the very worst, illiberal impulses — for him to win an Electoral College victory.

The problem is, if the left in this country were clearly articulating the liberal alternative, as it has done within living memory, it would have pulled along enough people from the center to utterly repudiate Trumpism in 2016. But that’s not the case. Unfortunately, there is a good deal of illiberality on the left, and that prevents us from having a clear, American liberal alternative.

The news on this front isn’t all bad, of course. The best thing that has happened in our politics in recent years was the Democratic Party’s decision to nominate Joe Biden for president. Joe is the perfect representative — and about the only one who sought the office this year — of the kind of liberal values that have been the glory of this country from the start. If he wins the election — better yet, if he utterly crushes Trumpism in November — it make be the first step in saving this country from recent trends. And that would be wonderful — for America, for the rest of the world, and for the ideas that are the only positive way forward, and the only things worth celebrating on this holiday.

If you read this blog regularly, y’all know that I gravitate toward the opinions of “Never Trump” conservatives. They come closer to expressing what is really wrong with Trumpism, from my point of view. So I was motivated to write this piece when I saw a column today from Bret Stephens at the NYT, headlined “Reading Orwell for the Fourth of July.” After dismissing Trump as an “instinctual fascist” who is fortunately really bad at it, he writes:

The more serious problem today comes from the left: from liberal elites who, when tested, lack the courage of their liberal convictions; from so-called progressives whose core convictions were never liberal to begin with; from administrative types at nonprofits and corporations who, with only vague convictions of their own, don’t want to be on the wrong side of a P.R. headache.

This has been the great cultural story of the last few years. It is typified by incidents such as The New Yorker’s David Remnick thinking it would be a good idea to interview Steve Bannon for the magazine’s annual festival — until a Twitter mob and some members of his own staff decided otherwise. Or by The Washington Post devoting 3,000 words to destroying the life of a private person of no particular note because in 2018 she wore blackface, with ironic intent, at a Halloween party. Or by big corporations pulling ads from Facebook while demanding the company do more to censor forms of speech they deem impermissible.

These stories matter because an idea is at risk. That’s the idea that people who cannot speak freely will not be able to think clearly, and that no society can long flourish when contrarians are treated as heretics.

Frankly, I disagree with Stephens that the illiberal impulse on the left is worse than the one on the right. (Having a wannabe fascist as president of the United States is a national emergency, no matter how incompetent he is.) But I agree that it’s bad, because it distracts the left from the ideas that would save our country.

Trump, of course, wants people to think that you have to choose one or the other — his way, or that of the statue-destroyers (the less-discriminating sort, that can’t tell the difference between a statue of Washington and one of Nathan Bedford Forrest).

But we don’t have to choose between those extremes. In fact, if America and the hope it offers to the world are to survive, we must not.

We have to be able to applaud people who find what happened to George Floyd an outrage, a violation of all we believe in, while at the same time condemning people who would attack a statue of Abraham Lincoln dedicated with the help of Frederick Douglass.

If we can’t do that, we’re sunk, and the Fourth of July is nothing more but an opportunity to sell hot dogs.

The problem, of course, is greater than overexcited demonstrators who go off-course. When the NYT itself recasts American history itself as being about nothing but slavery and oppression — as being about 1619 rather than 1776 — we’ve got a problem. When a crowd of indignant people from the newsroom — you know, people who are not supposed to have opinions — can topple the paper’s editorial page editor for running a piece with which they (and the editor) disagree, we are losing one of the great institutions that has stood for liberal values.

Another of those anti-Trump conservatives at the NYT (and when the paper stops running such people, the institution really will be dead) had a piece that offered an examination of similar concerns. With reference to the coronavirus, David Brooks wrote:

I had hopes that the crisis would bring us together, but it’s made everything harder and worse. And now I worry less about populism or radical wokeness than about a pervasive loss of national faith.

What’s lurking, I hope, somewhere deep down inside is our shared ferocious love for our common country and a vision for the role America could play as the great pluralist beacon of the 21st century…

I hope so. And that hope is what I’m embracing on this holiday. We’ve got to stop thinking people have to choose between Trumpian populism or popular “wokeness,” and get behind a way of thinking that respects an honest and open interchange of ideas.

75 thoughts on “How about if today, we celebrate liberal values?”