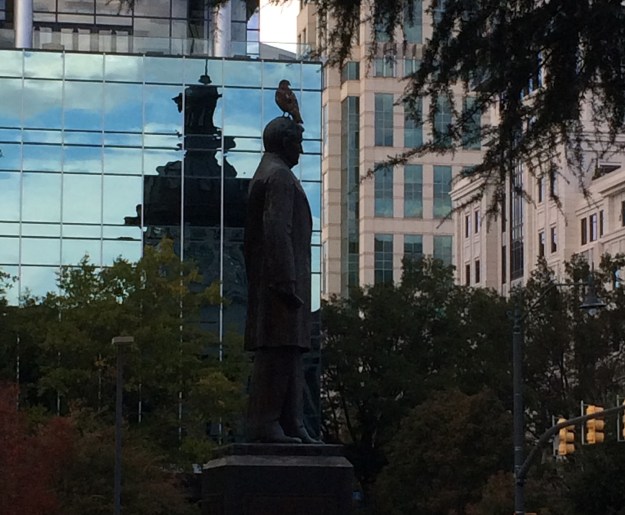 I had this idea weeks ago. I doubt it’s original, because it seems too obvious. Surely others have thought of it.

But after finally watching “Hamilton” all the way through for the first time on Disney+ (which I need to do a separate post on), and seeing more about taking down statues in Washington, I wanted to go ahead and get the idea out there, in case other folks haven’t thought of it.

Obviously, Ben Tillman has to come down. Not because of protests across the country at this moment (or at least not solely for that reason), but because he was always a horror, and there was never a time when he should have been up there, by the standards of any time. Of course, I’ll admit I’m prejudiced, from way back. The newspaper to which I devoted 22 years was founded to oppose Tillman; that’s what The State was all about. Our first editor (and in a sense my predecessor) gave his life in the cause of opposing the Tillmans. And while I don’t know all the whys and wherefores, I know my family opposed him at the time (although I can’t explain all the causes). He was my great-grandparents’ neighbor on Capitol Hill, and I hear they were appalled when he would tempt my grandmother, as a tiny girl, to come sit on his lap on his porch by offering her apples from his cellar. (Which may sound sort of innocent, but can chill your blood when you think about him.)

Anyway, that’s settled. He’s got to go. We just need to get the Legislature to act on it. But what do we replace him with? I think my idea offers additional incentive that should make us hasten to remove Pitchfork Ben.

Replace him with John Laurens. A South Carolinian through and through, and a hero who gave his life to help found this country.

And he was a hero in more ways than one, espousing ideas that were far ahead of his time, especially in South Carolina. Does that mean he was “woke” by 2020 standards? Probably not. But wow, it took guts for this son of a slave trader to take the public positions he did back in the 1770s and 80s:

As the British stepped up operations in the South, Laurens promoted the idea of arming slaves and granting them freedom in return for their service. He had written, “We Americans at least in the Southern Colonies, cannot contend with a good Grace, for Liberty, until we shall have enfranchised our Slaves.” Laurens was set apart from other leaders in Revolutionary-era South Carolina by his belief that black and white people shared a similar nature and could aspire to freedom in a republican society.[1]

In early 1778, Laurens proposed to his father, who was then the President of the Continental Congress, to use forty slaves he stood to inherit as part of a brigade. Henry Laurens granted the request, but with reservations that caused postponement of the project.

Congress approved the concept of a regiment of slaves in March 1779, and sent Laurens south to recruit a regiment of 3,000 black soldiers; however, the plan was opposed, and Laurens was ultimately unsuccessful. Having won election to the South Carolina House of Representatives, Laurens introduced his black regiment plan in 1779, again in 1780, and a third time in 1782, meeting overwhelming rejection each time. Governor John Rutledge and General Christopher Gadsden were among the opponents….

In other words, he stood against the overwhelming political sentiment in this state, on the state’s most explosive issue ever.

I also liked this observation from a history professor in Tennessee:

Laurens speaks more clearly to us today than other men of the American Revolution whose names are far more familiar. Unlike all other southern political leaders of the time, he believed that blacks shared a similar nature with whites, which included a natural right to liberty. “We have sunk the Africans & their descendants below the Standard of Humanity,” he wrote, “and almost render’d them incapable of that Blessing which equal Heaven bestow’d upon us all.” Whereas other men considered property the basis of liberty, Laurens believed liberty that rested on the sweat of slaves was not deserving of the name. To that extent, at least, his beliefs make him our contemporary, a man worthy of more attention than the footnote he has been in most accounts of the American Revolution….

So in other words this privileged white man of the South Carolina ruling class was saying, in the 18th century, that black lives matter. Which in his day and place, was an extremely radical position.

Maybe there are other good ideas for replacing Tillman. Truth is, almost anyone or anything would be better than Tillman. I was just trying to think of one who embodied something in our history we should be celebrating, for a change…