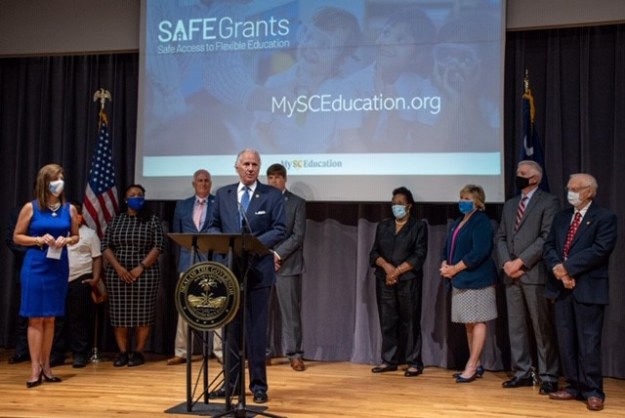 I keep putting off writing about this because I haven’t had time to sit down and fully vent about it. But I might as well post something to get the conversation started.

This guy that you my fellow citizens elected governor had $48.5 million at his disposal in the governor’s discretionary education part of the money Washington sent South Carolina under the Coronavirus Aid, Relief, and Economic Security Act passed at the start of the pandemic emergency in March.

He decided to send $32 million — just under two-thirds of it — to private schools!

In all these years that the worst kinds of Republicans in South Carolina have tried to find ways to shift public funds away from public education and use it to pay parents to abandon those schools, I’ve never seen anyone even suggest attempting to do anything as bald, as naked, as outrageous as this.

As the Post and Courier put it, in this one swoop, McMaster has accomplished “unilaterally what advocates have tried to push through the Legislature for 16 years.” “Advocates,” of course, being a polite way to refer to enemies of public education.

As bad as we thought Mark Sanford was, he never did anything like this. Then again, he never had the opportunity. Of course, I have to admit that Sanford being Sanford, he would have spent all his energy trying to prevent the federal money from coming to South Carolina to start with. There are different kinds of crazy.

This isn’t crazy, though. It’s just hostile — to the very idea of public schools, to the bottom-line concept that all of South Carolina’s children should have an opportunity to get ahead in the world — or at least to start catching up. And of course it’s an utter rejection of the idea that the state has an obligation to help them get that opportunity.

He can’t order South Carolinians to wear masks to save lives. That would be too bold. But he can do this.